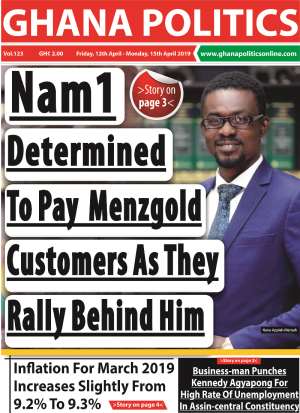 The war chanting Menzgold customers have suddenly gone cold towards the embattled Menzgold Chief Executive Officer Nana Appiah Mensah aka NAM1 after reports say the latter has been freed by a Dubai court.

Members of the Coalition of Aggrieved Menzgold Customers (CAMC) have also assured NAM1 that they are behind him because he is not entirely to be blamed for the unfortunate Menzgold Saga.

The aggrieved customers say they are hopeful that they would get their monies back when NAM1 arrives in Ghana, expressing their preparedness to put back their monies into Menzgold if the company satisfies all legal requirements and cleared to do business.

Again, they said they will continue to invest their monies in Menzgold, if their locked up funds are reimbursed.

“You’ll still have to drink water even if your only child drowns in water; such is the order of life”, the customers justified their resolve to reinvest in Menzgold, if they get their monies back.

Spokesperson for the CAMC, Timothy Binorp said if the Securities and Exchange Commission (SEC) and other state regulators had handled the matter more professionally, the matter would not have gotten out of hands.

Timothy Binorp said, “Government cannot deny the benefits it derived from Nana Appiah Mensah, at least he employed some youth and paid taxes, so he should not be crucified”.

He said the number of Menzgold employees who are currently sitting at home, must be a cause for worry for the government.

A close source in Dubai told Ghana Politics Newspaper that NAM1 is determined to pay menzgold customers as soon as he comes back and resolve his issues with the Ghana government.

The source added that NAM1 intended looking for money to pay aggrieved customers but per the court ruling he has 30 days to pursue his case against the Horizon Royal Diamonds for his money before he comes back to Ghana.

Ghana's Consul-General to Dubai, Samata Gifty Bukari said in an interview that her briefing from her Officer in charge of consulate affairs who has keenly followed the NAM 1 case suggest that NAM1 is hopeful of settling his indebtedness to the customers after his release.

“When NAM 1 had the bail, I received briefing that he planned to look for money to come down to Ghana and pay the distressed customers”, Madam Samantha said.

NAM1 has been in Dubai cell since November 2018 over a gold deal gone bad.