Kenya celebrates the first 100 years of Cottar’s, a pioneer in African safari tourism

Named one of the world’s best safari camps and visited by Hollywood stars and royal families, Cottar’s is ‘a powerful Kenyan brand’ due to continuous innovation and investment, says Tourism CS 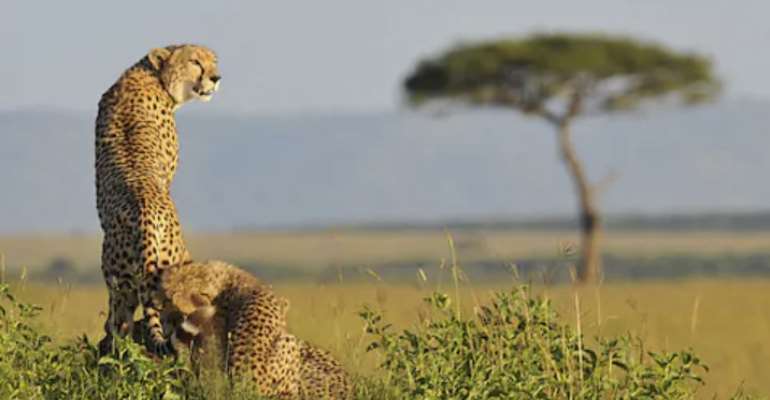 Nairobi, 11th April - Cottar’s Safari Service is this week celebrating Kenya’s place as the pioneer of safari tourism with a ceremony attended by government and dignitaries to mark 100 years of the company’s iconic position in shaping African and world safari tourism.

Cottar's, which continues to hold a global iconic safari position with its 1920s Camp and Bush Villa as one of the world’s leading safari destinations; was one of the first to launch safaris in Africa, the first to import American safari vehicles to Kenya, and the first to launch photographic safaris in the 1960s. For it to remain in one family for 5 generations is a considerable achievement. Within Kenya, Cottar’s and their 1920’s Camp and Villa keep a very low profile, but globally – this small family-run, purpose-driven company punches way above its weight.

The safari company, launched by Charles Cottar in 1919, has remained at the very top of the tourism market to this day. Cottar’s 1920s Camp and the Bush Villa are both nominated in the 2019’s World Travel Awards as Kenya’s best tents safari camp and Africa’s best private luxury villa and are also nominated for 11 awards each for The Safari Awards 2019. They equally continue to be named as a top global destination by Travel + Leisure, Tatler, Condé Nast, Harper’s Bazaar and Fodor’s, with Fodor’s naming it the ‘Trip of a Lifetime’ in its own rankings.

Yet, even as Cottar’s Safari Service continues to cater to the world’s royalty, celebrities and most romantic tourists, it has maintained its lead in innovation, now scooping multiple awards for its vanguard position in sustainable purpose driven-tourism and conservation.

The camp has, for example, banned plastic water bottles and instead developed its own water source, which it uses to fill metal water bottles that it gives to every visitor. It also has a unique relationship with the local Maasai community, securing human development, and land use management to secure biodiversity in a 7608-acre conservancy bordering the Maasai Mara Reserve.

“We have maintained Cottar’s Safari Service as a Kenyan institution, placing the country at the head of safari rankings repeatedly, for tourism that we helped begin and which we continue to develop and pioneer,” said Calvin Cottar, who today heads the company with his business partner Louise.

Leading the celebration of the camp’s first 100 years at an event attended by more than 200 dignitaries in Nairobi on 11thApril, HE Najib Balala, Cabinet Secretary for Tourism, cited Cottar’s as a leader in the development of the kind of exceptional and niche tourism integral to Kenya’s National Tourism Blueprint (NTB) 2030.

“Cottar’s has inspired the world and become part of a powerful Kenyan brand, with a very personal and homely touch. They have embraced change and innovation to respond to the demands of a very discerning clientele. This is the way to go for our tourism sector, which needs to be dynamic, as its survival calls for changing with the changing times. I congratulate Cottar’s for this historic achievement and wish them all the best in their future plans,” he said.

Cottar’s has additionally moved to mark its first 100 years with the launch of Cottar’s Archival Trust, a large repository of historical safari film and photos, containing 80,000 archival images and reels of film footage from 1909 to date.

“Cottar’s has made both history and an entire global industry. With the film and photo trust, we have moved to mark that position with a permanent historical record for researchers and the world,” said Calvin.