Will The Brits Still Eat French Apples If There's A No-deal Brexit? 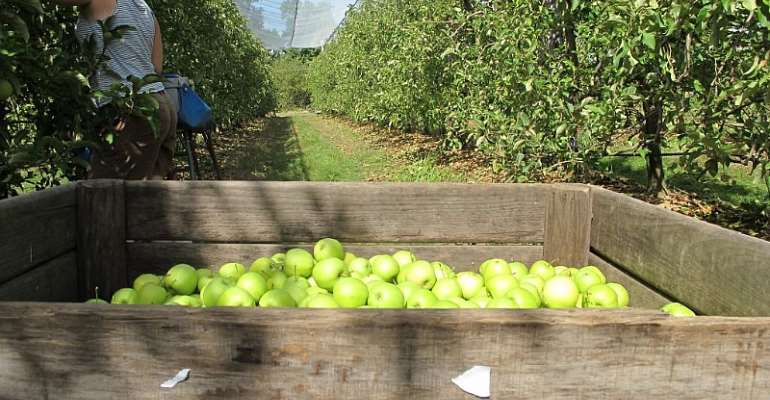 France exports around half of its 1.6 million tonne annual production of apples. The lion's share, some 20 percent, goes to the UK. So, in the event of a no-deal Brexit, France risks losing its biggest export market. Apple producers in the Val de Loire region, around 250km south-west of Paris, are nervous and sad at the prospect.

"Great Britain is special for apple producers in our region because we've been exporting for several decades," says local apple grower Jean-Louis Moulon.

"We have a close relationship between buyer and seller, it goes quite deep, some people have even struck up friendships. You don't have that lasting trading relationship with Britain anywhere else in France."

Moulon's farm, La Martinoise, is over in the Berry region near Bourges but today we're strolling through the 35 hectares of orchards at the La Morinière, a testing centre near Tours, which helps local apple and pear growers improve their crops.

The apple trees are in full bloom and, come harvest time, around a third of the production - way above the national average - will find its way onto supermarket shelves and ultimately kids' lunch boxes in the UK.

Of course Britain has its own apple-growing tradition, but around 40 years ago Brits developped a sweet tooth and turned to France, and in particular the Loire Valley, for varieties they couldn't grow back home.

"The apples we export to the UK are quite sweet: Golden Delicious, Granny Smith, Gala and Pink Lady are the main varieties," Moulon explains. "We've got the right climatic conditions here in the Loire Valley: sun, heat, cool mornings. The UK has a history of growing more acidic apples like Cox's Orange Pippin which are adapted to their climate and soil. The British consumer has got used to eating apples from the Loire Valley!"

But for how much longer?

If the UK eventually crashes out of Europe without a deal, it will at the very least complicate the export of the shiny Granny Smiths and green Golden Delicious so prized across the Channel.

Moulon, who's also head of a local apple growers union, says the extra red tape at customs would lead to a doubling of the current 50 seconds it takes to get a lorry through customs, leading to tens of kilometres of tailbacks.

"It will have an impact on the price, on the haulage firms. Some hauliers have already told us they'll lose time and might not want to continue. We're really worried how things are going to work at the border. But we're going to have to sort this out together, unfortunately."

In 2015, France lost Algeria, one of its main apple export markets. When the drop in the price of oil led to an economic crisis, the north African country stopped importing French apples and focused on producing their own. France lost the Russian market in 2014 when the EU-Russia embargo was introduced over Ukraine.

Should apple exports to the UK grind to a halt, the surplus of French apples on the domestic market could create extra problems according to the regional Chamber of Agriculture.

France has made recent efforts to boost apple exports to South America and parts of Asia. Around three years ago it began exporting certain "luxury" varieties to China and they're hopeful this will develop. But it will take time.

If you're not optimistic you change jobs

Moulon seems genuinely concerned over the prospect of a no-deal. "It's sad, for both sides," he says, "and we can't do anything about it."

But he prefers to remain optimistic that a solution will be found, or that the two countries will find new ways of working together. He points to the techniques La Morinière has found to guard against late frosts that can devastate fruit blossom.

Fanny Le Berre, an engineer specialising in pest prevention at La Morinière, shows me big buckets filled with wax at the end of some rows of trees.

"When temperatures are forecast to drop below zero, we light these huge candles and turn on several big wind turbines."

The turbines waft the warm air around and raise the overall temperature in the orchard.

"We were out lighting candles during the night," says Le Berre, "it's quite effective in protecting the blossom against frost damage."

They also use a sprinkler system to irrigate the blossom.

"The water gives off heat when it freezes and protects the flowers," she explains. "It works if the temperatures don't go below about minus 2°."

"When you're an apple grower, if you're pessimistic, you should change jobs," says Moulon. "We've always known how to overcome adverse weather conditions, as you can see in the way we reduce the impact of frost in the orchards. So we've got to overcome these transport constraints. We've been working with our English friends for 40 years, you can't stop that overnight."

"There's so much uncertainty, we don't know if the English will continue eating our apples. That is the question."

No one knows the answer.

The interviews in this article were originally recorded for use in the weekly RFI podcast Spotlight on France.