Sorry, Kennedy Agyapong Is Out Of Coverage Area 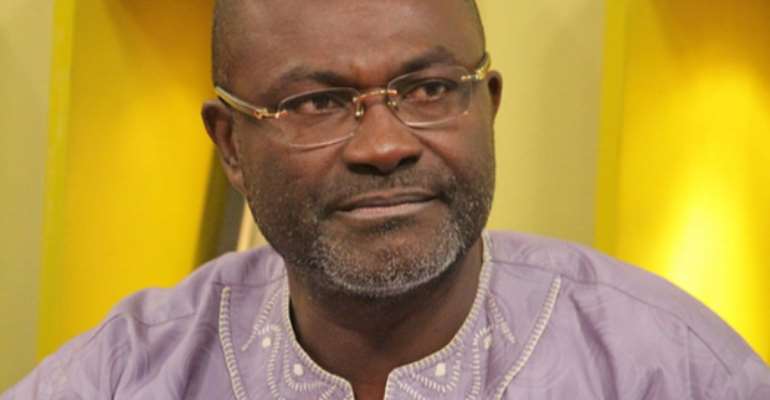 “Of course, I was bullied and of course I was called names – my last name in Weir. That's very, very close to 'weird', or queer and any of those names. But I've never been anyone to cry over spilled milk or be upset because kids don't like me… It makes my skin stronger and thicker…” Johnny Weir

Maverick Kennedy Agyapong is a good friend, we dare say. He has been known to us for more than twenty years. If there is any anybody who stirs up controversy around himself, none can surpass Kennedy Agyapong. In the past, we used to describe people like Kennedy Agyapong as 'Twa-my-a-eta-b] n' (that is, if the person passes, you can smell flatulence).

Pardon us for the use of 'Maverick' to describe Kennedy – he is only as independent thinker as Samuel A. Maverick (1803-70), the Texas rancher who, out of pity for his cows, refused to brand them.

Take it or leave it, Kennedy Agyapong has as many friends as he has enemies – and the love for him was amply displayed in May 2017 at Assin Dompim when his mother died. Of course, the hatred for him soared to the peak when he challenged Saint Anas over his crude methods in “exposing” corruption in Ghana – to the extent of (?)

Kennedy has decided to keep silent on political issues. According to him, there were some members of NPP bent on causing division in the party to the point of lying to the President and ruining the President's relationship with him. He was of the “gentility” of the party, and he had decided to toe that line for people to see the other side of him. As an anecdote, he was full of praise for the unity of purpose in NDC which would rally behind their members even when it was palpable that they had fallen fond of the law.

Controversy had surrounded every move of Kennedy, and people are left wondering how he got certain information and how he spins his stories brusquely and peremptorily.

He has had brushes with a large number of persons. As for Anas Aremeyaw Anas and his crude method of “investigations”, he has condemned these on several occasions. And when Anas's boy Suale was killed, Kennedy became the unfortunate target for having displayed his picture, to expose him to the world. Of course, he could not be pardoned for questioning why Anas would go and have a chat with the President of the Republic of Ghana with his face covered.

Kweku Baako had sued Kennedy over trifles, praying the court to collect about GH¢25 million from Kennedy for, is it defamation? Some people are asking: “Is it like the pot calling the kettle black?” You may remember Thomas Shelton: (1620 translation) “Don Quixote”, in which Sancho Panza criticized his master.

Kennedy has brazenly touched on various issues in Ghana. On religion, Bishop Obinim, who can change his body into a snake, Nimokafui, Ayentefrem of Cherubim and Seraphim group, says he loves Kennedy. He would not want Nimokafui and Ayetefrem to strangle him. He knows them: “they are beside God 24/7 of the time”.

Kennedy feels disappointed in Ghana Police – especially for linking him to the death of Suale, and for not acknowledging him for the role he played, leading to the arrest of the suspected killers.

On politics, he has variously described NDC as “evil people” and exposed many of the “evil deeds” of NDC, the lies, unfulfilled promises, et cetera. As for Anita de Sosoo, he declared that he did not want to “deal with unintelligent people”. He decided to quit politics, and not to run again as MP for his Assin Central Constituency; he has prevailed upon to change his decision.

He loves his village, Assin Dompim, where the Immigration Service's Training School is located. His mansion dubbed “White House” will soon be blessed with a renovation when Kennedy builds a 400-room hotel, a golf course, a swimming pool, a zoo and other attractions that will make the place a tourist spot – that is, if all goes well with the 50-year-old Ghanaian billionaire. His name would then “linger on”.

Talking of billionaires, one would be surprised at the ranking in “TrendsGH” of twenty billionaires in Ghana which did not include Kennedy, Kwame Despite, Addo Kuffour, Rawlings, NAM 1, or even Obinim. The ranking showed Charles Ampofo of Kampac Group with headquarters in Dubai as No.1 with $1.46b; Ernesto Tericone of Trassaco Group with $1.3b as No.2, Sam Jonah with $1.2b as No.3, Nabil Mourkhazel of Finatrade with $900m as No4 and Ibrahim Mahama of Engineers and Planners with $860m as No.5.

With a wife and thirteen children, Kennedy should be a proud family man. His eldest and youngest are 26 and 2 years old respectively. Don't make a miscalculation – all the 13 children do not come from one woman; some came up when he was “fooling around”.

Make no mistake: he started life as a poor boy whose three “girl-friends” rejected him because the chair he offered the first one had a leg broken and she fell upon sitting down; the second had a 'wall-to-wall' carpet in her own home, compared to the (?) of Agyapong and the third was more comfortable with another male visitor. He told them: “One day, I'll be somebody”.

If Kennedy should stick to his gun, and do as he has threatened, who will be the loser? Will Oman FM, Ashh FM, Net 2 Television be as attractive as they had been before?

Who can answer the question: Is Ghana worth dying for?