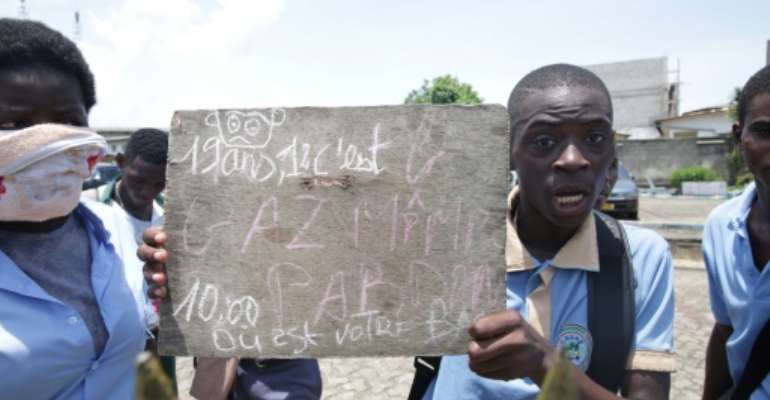 High school students took to the streets to protest at changes in the rules for awarding university grants. By Steve JORDAN (AFP)

The government of Gabon on Thursday announced a nationwide suspension of classes after high school students protested over plans to cut university grants.

"In its desire to calm the situation and listen to the public, the government of the republic has decided to suspend classes across the country," Education Minister Michel Menga M'Essonne said in a statement.

In late March, a draft decree reduced access to state grants for aspiring university students, setting 19 as the maximum age for access to funds and requiring applicants to reach a relatively high mark in the school certificate exam -- at least 12 points out of a maximum of 20.

Organisations representing high school students called on pupils to demonstrate peacefully on Monday, when a new term began, and to stay on the streets on subsequent days.

Thousands of youngsters protested in a number of towns, including hundreds in their school uniforms who paraded and chanted through downtown Libreville, escorted by police.

The reform would considerably reduce the number of students eligible to ask for the grant, which is worth some 83,000 CFA francs a month (127 euros / $143).

The ministry of higher education has published figures showing that 65 percent of students awarded grants in 2017 on the strength of the grades of their baccalaureat -- or high school certificate -- were aged 20 or over.

Young protesters argued that the cutback would make them "grant orphans" and claimed they should benefit from the same rights as their parents and elders.

The government said it was "very attentive to the development of the social climate" and "preoccupied by this wave of discontent", in the statement released Thursday.

"The state and the government will make every effort to award grants to our brilliant students, but we're not going to encourage mediocrity," he said.

Gabon, a former French colony in Equatorial Africa, achieved a high standard of living in African terms funded primarily by oil and tropical hardwood exports, but the economy nosedived after the drop in crude oil prices in 2014.

In 2017, Gabon obtained financial help from the International Monetary Fund (IMF), in exchange for cuts in public spending.