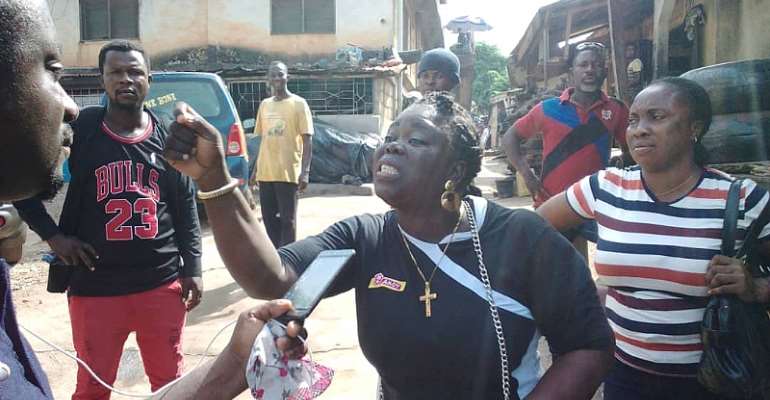 Irate customers of First Allied Savings and Loans limited have sworn heaven and earth to face any police personnel who will be deployed to restrain them from holding their next protest.

The leadership has disclosed that they will not kowtow any resistive move that will be initiated by the security forces since they are determined to sacrifice even the last drop of their blood for the release of their locked up deposits.

"If we have to burn tyres, block roads and strip ourselves naked as a way of registering our displeasure for the payment of our monies, we will make sure they happen" a provoked depositor announced.

These expressions of braggadocio were uttered by the leadership of the group at the time policemen were assigned to stop them from staging a demonstration at Suame Zone 4 during the early hours of 2nd April 2019.

What they described as unconstitutional action of the police according to the spokesperson Madam Charlotte Obeng came out as a big surprise to them because they prior to that day had secured a police permit and were given a green light by the same police authorities to carry out the protest.

She claimed that, after they were given the permit they were told by police authorities that they don't have enough personnel to offer them security in the course of their demonstration.

Speaking to thepressradio.com , the spokesperson wondered why authorities after claiming lack of enough personnel to protect them were able to assign close to two hundred policemen to stop them from staging the protest.

The leadership of the group after making inferences from the foregoing are holding suspicion that the police officials were bribed by the CEO of First Allied Savings and Loans Limited doubling as the CEO for A-Life Supermarket.