Office Of The Special Prosecutor And Public Anxiety 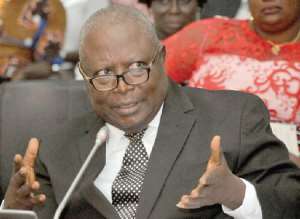 Corruption, as the abuse of entrusted power for private gain, has been common in Ghana for quite a long time. On account of its devastating effects on the economy and society various governments have since the 90s initiated several legal frameworks and established anti-corruption institutions to address the canker. In spite of all these Ghana's score and ranking on the Transparency International Corruption Perceptions Index has not improved significantly and even appear to have con­sistently deteriorated in recent times. Its ranking on the CPI, for instance, has fallen from the 64th to 78th position between 2012 and 2018.

It was thus no wonder that corruption became a major topical issue in the run-up to the 2016 general elections. Almost all the political parties made it a manifesto pledge to fight corruption in Ghana. The New Patriotic Party, for instance, promised on page 39 of its manifesto to establish an “Office of the Special Prosecutor, who will be independent of the executive, to investi­gate and prosecute certain categories of cases and allegations of corruption and other criminal wrongdoing, including those involving alleged violations of the Public Procurement Act and cases implicating political officeholders and politicians".

Upon assuming governance in 2017, the new government under Nana Akufo Addo quickly passed the Office of the Special Prosecutor (OSP) Act, 2018 (Act 959) to create the office. The president on receipt of the nomination of Mr. Martin Amidu by the Attorney General as the special pro­secutor submitted same on the same day to parliament for approval. The Presi­dent subsequently sworn into office Mr. Amidu as the first prosecutor and charged him to discharge his functions with, in the words of the president “…Godspeed … to the enhancement of the public life of our country and ultimately to the benefit and welfare of the Ghanaian people”. To underscore its importance the office was later given a dedicated budget line separate from that of the Ministry of Justice and Attorney General, which oversees its work. The speed with which the whole process was handled underscores how important the President con­sidered the OSP as a flagship tool for the fight against corruption.

The establishment of the office similarly caught the imagination and elicited the overwhelming support of the Ghanaian people. Currently, however, there appears to be an apparent growing disquiet about the office. Many have complai­ned that Mr. Amidu for more than a year in office is not living up to expectation as he has not prosecuted a single individual of any corrupt act which defeats the purpose of his office.

Even the Senior Minister, Yaw Osafo-Maafo, of the ruling govern­ment at a public event expressed disappointment in Mr. Amidu and complained that “…the way we expected that the office will be when created, it has not been that way for us”. A former Deputy Minister of Trade and Industry in the previous administration, Murtala Ibrahim Mohammed, would even want Mr Amidu to be cited for corruption prosecution. He disclosed on Radio Tamale that “Mr. Amidu who has lost credibility over time since his appointment has been … drawing salary causing financial loss to the state despite budgetary allocations made to his outfit in both the 2017 and 2018 annual budgets”. The Auditor General, Daniel Domelevo, has also cast doubt on the Special Prosecutor’s capability to deliver on his mandate, given his current set up.

During the one year anniversary of the swearing-in of Mr Amidu the Ghanaian Times sampled public opinions and found many Ghanaians to harbour reserva­tions about the office. A large section of the public hold the view that the Office of the Special Prosecutor is gradually losing its significance. A cross section of the public attributes this to the fact that government has not done much to secure the office promptly. Others blamed the prosecutor himself. In the opinion of an NGO, Public Interest Research and Advocacy Network-Gh, the inability to deliver on his mandate is an indication that Mr Martin Amidu may not be efficient at his post as Special Prosecutor. They believe the Special Pro­secutor is failing Ghanaians and the earlier the government takes a decision on him the better.

The Special Prosecutor has also being responding publicly to public criticisms about his inability so far to prosecute. He has complained about his lack of logistics, personnel, lack of legislative instrument and interfe­rence as well as non-cooperation of ministers and other government officials with his office. He believes these to be the challenges that hinder the office to execute its mandate effectively. Meanwhile, the Special Prosecutor asserts to be working on the quiet and that prosecutions on cases of alleged corruption would soon begin. On the other hand, the Attorney General who exercises oversight responsibility over the special prosecutor has also expressed worry over the frustrations and complaints of Mr. Amidu to the media and the public at large. Moreover, prior to his appointment Mr. Amidu himself had cast doubt about how effective the OSP is as an anti-graft tool, on account of his misgivings about the legislative instrument backing the OSP.

The deduction from the above seems to underscore one thing: that all is apparently not well with the office of the Special Prosecutor. In spite of its establish­ment more than a year ago as the President’s flagship tool to fight corruption in the country, the OSP appears unable to execute its mandate or has fallen short of expectation.

The constitution of Ghana affirms the parliament as the embodiment of the sovereign will of the people of Ghana, and assigns it the mandate to pass legislation, represent and facilitate the people’s involvement as well as participa­tion in the affairs of the country. It also oversees the performance of the executive, which itself controls the public services to ensure that the imple­mentation of public policy conforms to the approved developmental agenda of the state. It should, therefore, be of utmost concern to the parliament of Ghana if an exe­cutive branch of the public services is implementing public policy contrary to the approved developmental agenda of the executive.

The purpose of such an investigation may be to explore in detail challenges, to gather facts, to examine relevant evidence in depth, and to pro­vide the proper guidance for government to determine any necessary corrective actions for effective and timely execution of the mandate of the OSP. This inquiry is not to find fault.