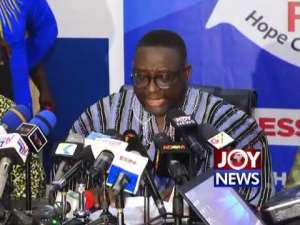 General Secretary of the opposition NDC, Mr Asiedu Nketia says they are unhappy with the first round of talks.

The NPP believes the NDC scribe’s decision to grant the radio interviews on the meeting was against the rules.

For Mr Asamoah the NDC General Secretary should have known better because his conduct is not one a mature politician like him should exhibit.

“…if we had wanted to hold the meeting in a market place, all the media were there we would have had them in the room…yet they waited in the anteroom until we finished before they came in.

“So how can an eminent and veteran politician like Asiedu Nketia go around saying things that are an interpretation of his own facts. He wants to impose his set of facts on the nation and it is not fair. I will not go down that lane, I will not breach trust,” he added.

He suggested that Mr Asiedu Nketia’s behavior smacks of someone who wants to intentionally breakdown the talks.

“Why do you go round saying that this person said this, that person said tht and this one doesn’t want to do that...why can’t you wait until April 29? Why can’t you write to the Chairman of the Peace Council stating your reservations,” he queried.