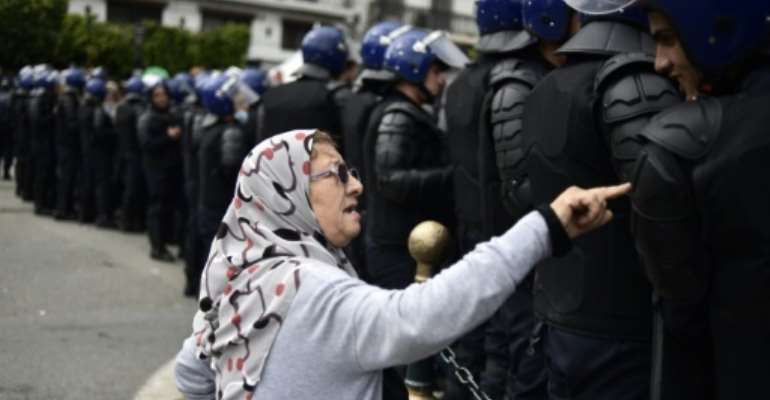 Anti-regime rallies have been held in Algeria over the past seven weeks. By RYAD KRAMDI (AFP)

Algeria will head to the polls in July, the presidency announced Wednesday, as demonstrators kept up protests against the ruling elite following veteran leader Abdelaziz Bouteflika's resignation.

The new date was set a day after Bensalah assumed office for a 90-day period, as stipulated by the constitution but much to the ire of demonstrators.

Chants of "Go away Bensalah!" and "A free Algeria!" rang out from thousands of demonstrators gathered under police surveillance in Algiers, where anti-regime rallies have been held over the past seven weeks.

The appointment of upper house speaker Bensalah as Algeria's first new president in 20 years failed to meet the demands of demonstrators.

Although 77-year-old Bensalah is barred under the constitution from running in the upcoming election, protesters have nonetheless pushed for the close Bouteflika ally to step down.

Students and magistrates on Wednesday called for demonstrators to keep up their rallies and marches in the capital and other cities across the North African country. 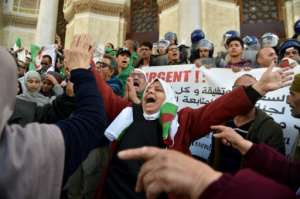 Army chief General Ahmed Gaid Salah, quoted in a defence ministry statement, said the military would ensure the transition follows the "rules of transparency and integrity, and the laws of the republic".

But he warned against "slogans aimed at leading the country to a constitutional void and destroying state institutions".

"With the start of the new phase and continued marches, we deplore the emergence of attempts by certain foreign parties... to destabilise the country", he said, without pointing fingers.

The army chief also signalled that the military would safeguard Algeria's institutions.

"It is unreasonable to manage the transition period without the institutions," Salah said, warning that such a scenario "could compromise all that has been achieved to this day since independence" from France in 1962.

For the first time in the wave of demonstrations which have swept Algiers since mid-February, police fired tear gas and water cannons Tuesday to try to disperse a protest by students.

"What happened yesterday was a violation of our right to demonstrate," said 22-year-old journalism student Asma.

"We'll carry on every day if needed until the last of the (ruling) clan is out."

All eyes on Friday turnout 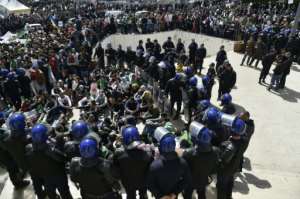 Since Bouteflika announced his resignation on April 2 after losing the military's support, the demonstrators have urged that regime insiders be excluded from the political transition.

All eyes are now focused on the turnout on the streets on Friday, the traditional day of protests in Algeria, and whether the authorities will adopt a tougher line and step up security measures.

For Mohamed Hennad, a political sciences professor at the University of Algiers, "the balance of forces will favour the street if it's a large mobilisation on Friday" as in past weeks.

For many ordinary Algerians, the interim president's assurance of a constitutional transition to a post-Bouteflika future has fallen short of easing their concerns.

"Bensalah is a leftover of the system... For the past twenty years, they've made us promises. 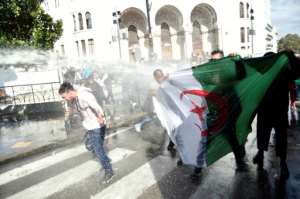 Algerian riot police spray anti-government protesters with water during a demonstration in the capital Algiers. By RYAD KRAMDI (AFP)

"The result: they've taken everything and left the people in poverty," said Lahcen, who works in an Algiers cafe.

The protest movement is calling for a new transitional framework that is committed to deep reforms.

The ailing Bouteflika finally stepped down at the age of 82 after weeks of demonstrations triggered by his bid for a fifth term in office.

After two decades in power, he had lost the backing of key supporters including the armed forces chief.