US resumes air strikes in Somalia after brief pause 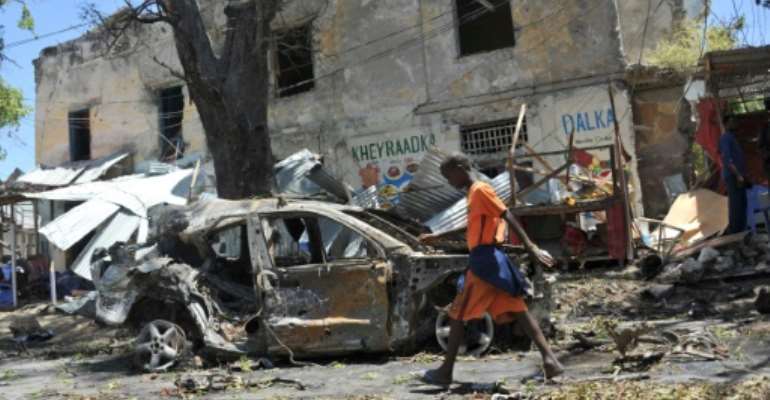 Al-Shabaab remains the key threat to peace in Somalia, carrying out attacks like this car bombing in Mogadishu on March 7, 2019, which left four people dead. By Mohamed ABDIWAHAB (AFP/File)

The United States said Wednesday it has resumed air strikes against the Al-Shabaab Islamist group in Somalia, after a brief pause that followed accusations from Amnesty International that it had tried to hide civilian casualties.

The latest air strike was carried out on Tuesday near Jilib, in the Moyen-Juba region southwest of Mogadishu, and killed one Islamist fighter, the US Africa Command (Africom) said.

"Currently, we assess no civilians were injured or killed as a result of this air strike," Africom said in a statement, adding, for the first time, that the army had procedures in place to collect follow-up information on the impact of bombings.

It was the first air raid carried out by the US military since March 18. The day after that strike, Amnesty published a report saying 14 civilians had been killed and seven wounded in the course of five air strikes attributed to the US military.

Africom denied any civilian deaths in its operations, but on Friday admitted responsibility for the death in April 2018 of a woman and child, after receiving information which it said had not been previously passed on.

An inquiry is underway into all US air strikes carried out since June 2017, when the operations began.

The Amnesty charges came at a moment when the US military was stepping up its operations in Somalia, with 28 air strikes since the beginning of 2019, against 47 carried out in the whole of 2018 and 35 in 2017.

The United States is backing the military campaign of the Somali government and the African Union mission against Al-Shabab, which has been operating in the country since 2007.

The Al-Qaeda-linked group was forced out of the capital Mogadishu in 2011 and then progressively from the major cities by African Union troops.

But they still control vast swathes of rural territory, from which they launch guerilla raids or suicide bombings against government and security targets, including in the capital.