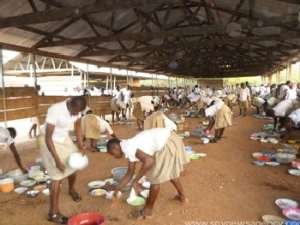 Ko Senior High School is one of the young and promising Senior High Schools that is fast gaining grounds in the National popularity index. The school, established in 1994, is located in Nandom District of the Upper West Region. The school is directly managed by the Ghana Education Service under the Ministry of Education. It was established as a Community Day Senior High School by the Traditional and Opinion leaders with the support of the Regional and District Directors of Education around the Ko Community who thought that their sons and daughters were deprived of Secondary Education. The school which was pioneered with forty-four students in 1994 now has a colossal population of one thousand and seventy students comprising of both males and females. The school operated the Day school system from 1994 till 2006 when it was granted a boarding status by the government of Ghana. The school is both missioned and vision to provide quality education and good moral training to its students who will be resilient, independent, resourceful and self-reliant in all aspects of life. It currently offers three programs thus, General Arts, Business and Home Science.

After 25 years of educational journey, the school is bedeviled with very critical challenges that need immediate attention. A lot needs to be done to give it a befitting social status as a full-fledged Senior High School of social standing. Despite the dwindling and unfavorable conditions that the school is bedeviled with, the school still breaks chains to chalk unimaginable successes to the admiration of all and sundry. In spite of all these successes chalked, the school has still not attracted the attention of government and its agencies to give it a refurbishment by meeting its demands. It is against this backdrop that, as a concerned Old Student who endured such intolerable conditions from 2007 to 2011 and who has also visited the school on countless occasions since completion, I wish to write to crave the indulgence of the appropriate institutions to this menace for an immediate action to be taken to ameliorate the situation. I therefore resolve to write and crave the indulgence of the Nandom District Director of Education, The Member of Parliament for Nandom District, The District Chief Executive, The Parents and Teachers Association, The Regional Director of Education, The Ghana Education Service, The Ministry of Education, The Upper West Regional Minister, All Stakeholders, Philanthropists, NGOs and all well-meaning Ghanaians to help give the school a facelift from its knees.

Barring all odds, the school has chalked the following successes since its inception.

The school has churned out level headed individuals who are not only academians but who are also contributing meaningfully to the Ghanaian economy in all sectors. The school admittedly has produced skilled labours in all diversity that are doing well in almost all the sectors of the nation such as Health, Education, Technology, Banking, Military, Religion, Sports, Politics and et cetera. It is also a fact worth stating that, when one visits both public and private tertiary institutions one sees former students of this school who have also met the competitive cutoff points with other schools to gain admissions. This is evident of the quality of teaching and learning that go on in the school.

It cannot go unmentioned of the brilliant and unmatched performance usually displayed by the school in its WASSCE examinations yearly. A special mention can be made of the 2011 and 2013 WASSCE candidates whose performance has gone into the archives and history of the school with a 100% pass. This maiden and enviable success catapulted its academic record above well-known schools such as Wa SHS.

The 2013 National Best Teacher award which was keenly contested was won by an Old Student of this school (Mr. Simon Jude Yifaa). Also, the 2008 District Best Teacher Award (Lawra District) was again won by a former student of this institution (Mr. Kobekyaa Y. Richard). This does not need further explanation to ascertain the quality of human labour being produced yearly by this school. These merited and flavored achievements are attestations to the quality of human labour that the nation is reaping from the school.

Notwithstanding these splendid successes chalked, the school has remained one of the less endowed schools in the Region that needs special attention. The school has remained the heartbeat of its authorities because of its unmatched population growth with its available infrastructure. Below are some of the challenges being encountered by the school.

My heart misses a beat anytime I think about the ‘’no-fence wall’’ issue of the school. The school since its inception, twenty-five years ago, still has no fence wall. This is giving the school authorities tough time in implementing disciplinary measures by monitoring students closely. This invariably is giving authorities tough stretch in ensuring the holistic development of these young ones as its core mandate.

One of the issues that has given management sleepless nights is the inadequate teachers’ bungalows. This situation has remained a ‘’long-serving’’ problem since time immemorial that needs immediate attention. As a result, many are the teachers who tender in applications to have their postings reviewed while some refuse to report upon realizing the acute shortage of accommodation on campus. It is indeed perturbing and heartbreaking to know that out of over fifty teaching staff only four teachers are lodging on campus. This strenuous and stressful condition has demotivated some teachers who think that walking about four to five kilometers to teach every day is not worth sacrificing. I am tempted to reason alongside these teachers considering the longevity of the journey and the nature of work in the classroom. This gives them no rest as walking to and from school keeps them exhausted and bored.

It is worrisome to realize that the issue of inadequate accommodation in this school has affected both teachers and students. The situation of accommodation has gone berserk that management has to take a very difficult decision of deboardenizing some of the students to stay in town while the dining hall is partitioned to accommodate a section of them. This issue has generated heated argument between the town and management because of the incessant attacks on these poor students who claim to be under free Senior High School. At a time when the Ghana Health Service warned the public over airborne diseases, the school had lost a student through CSM, while some survived the same menace and others chicken pox. This disturbing factor has made some of the students to refuse admissions, while some get frustrated in the process and abandon the school for apparent reasons that need no further investigation. The situation is gaining so much grounds that something has to be done within the shortest possible time to give salvation to these poor students who aspire to achieve greater heights tomorrow.

To mince no words, per the architectural design of the school, the consultant did not cater for future developments; as a result, Head of Departments (HODs) in the school have to carry out office work either under trees or in the staff common room which is not also spacious enough to contain them because it has also been partitioned to house some offices such as the School Administrator. This uncomfortable and intolerable situation is posing a serious health risk to the teachers who see themselves as HODs without offices. I wish to remind ourselves that, under the Labour Act, 2003(Act651) of the 1992 constitution of the Republic of Ghana, the Constitution, in clause 10 subsection (a) of the Act enjoins an employee a right to work under satisfactory, safe and healthy conditions.

In the spirit and letter of the constitution and following a fortnight from the day of the establishment of the school by government it is of great necessity that something should be done to ameliorate this hazardous and inimical situation that is grievously stampeding both administrative and academic work. This has made their work in their various capacities extremely difficult and demotivating verily. It must be laid to bare that, the school can only ‘’claim’’ of a well-furnished headmaster’s office, any other office in that school is a mere representation not worth calling an office. This has demotivated some senior staff from accepting appointments into some offices because of the unconducive and unattractive nature of the job environment.

It is very disheartening to know that there is no practical unit for the Home Science department. Every attempt to convert one of the classrooms into a practical unit permanently has remained a dream for decades because of the inadequate classrooms available. This is greatly affecting smooth academic work in the department. Sometimes students are able to manage with only three practicals or less for their three-year stay on campus. This is below par and as such very saddening! Such students complete, parading themselves as having studied Home Science but in effect cannot carry out any meaningful practicals in their social lives.

Lastly, the school has envisaged for long to introduce General Science into its programs of study, but this well-nursed idea has remained a paper dream because of bureaucracy. It is sad to note that the school has never for ones participated in the much taunted National Science and Maths Quiz (NSMQ) because of its deficiency in science knowledge. This is making the school unpopular and kills the morale of both teachers and students whose dream of participating in this much talked about NMSQ is becoming a mirage reality. The school equally needs academic exposure that will keep it on its toes in the academic field. I am of no uncertain terms that, should Ko SHS compete in this NSMQ in the not too distant future it is capable of lifting the trophy like all other schools. It is a school of surprises! I wish to entreat The Ghana Education Service under the Ministry of Education to expedite action to give the school a national exposure by way of fast-tracking the introduction of the envisaged General Science Program with its accompanying laboratory and the needed equipment to satisfy its curiosity.

These are but a few of the challenges that the school has been battling with since time immemorial. For the avoidance of doubt, doubting Thomases might make background checks at the school to authenticate and confirm these assertions.

It is my expectation that this write-up would touch the hearts of government and the authorized institutions to solve if not all but some of the challenges to give the school a facelift.