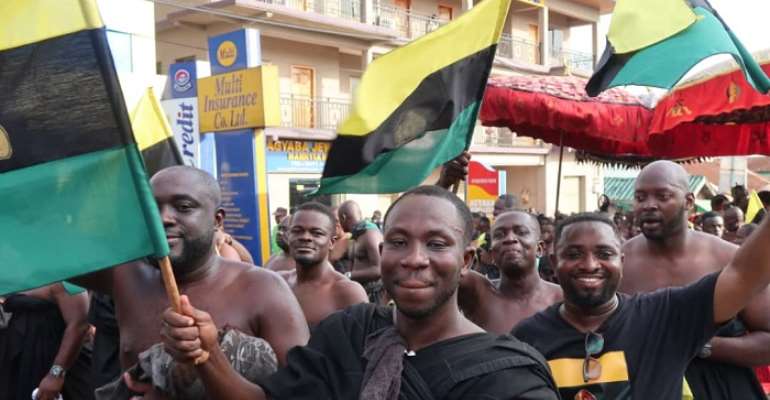 A ban on funerals across Asanteman has started from April 8-29, 2019. The ban forms part of activities marking the 20th Anniversary of the ascension of the Golden Stool by Asantehene, Otumfuo Osei Tutu II.

During the past 20 years, Otumfuo's excellent reign has resulted in total transformation of Asanteman.

The Asanteman Traditional Council wants to use the 20th Anniversary to make merry and celebrate Otumfuo for his achievements.

In this regard, a ban had been placed on funerals in order to prevent people from

mourning during the period.

Asanteman stretches beyond the boundaries of Ashanti and Ahafo Regions, and the ban is in full force in every part of Asanteman.

Meanwhile, the yellow, black and green colours of Asanteman can been seen all over Kumasi and the rest of Asanteman.

The Asanteman flags can also been seen on commercial and private cars in Kumasi.

Interestingly, some residents of Kumasi have lately been seen with miniature Asanteman flags in town.

A grand durbar of chiefs and people would be held at the Manhyia Palace to climax the celebration on Sunday, April 21, this year.