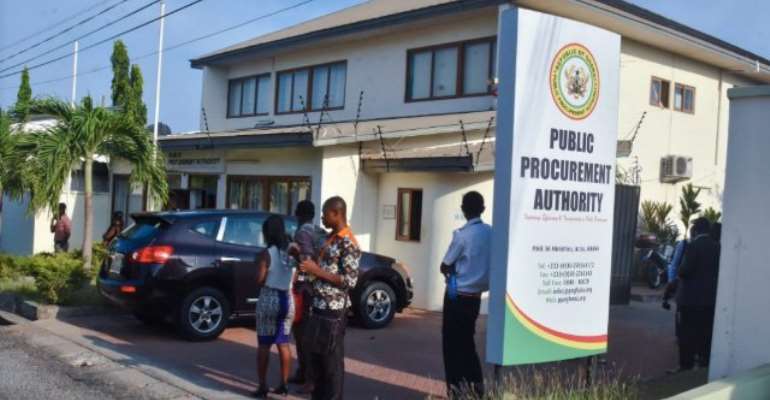 The PPA does not track contractors that have been debarred in the country, even though it advertises them on its website, according to a report.

The problem is: 70% of Ghana’s roads are in deplorable condition. Of them, more than half are not paved. Most are littered with potholes and deep ridges that lead to negligent driving and, in the worst cases, death.

To fix the issue, the government has hired contractors to come and fix them. But many contracts abandon the projects.

According to a report, investigated and compiled by JoyNews’ weekly evening programme “Corruption Watch,” many contractors leave because the government do not meet the terms negotiated in their contracts. The end result usually results in the government blackballing the contractor, restricting him/her from ever doing business in Ghana.

That is where the Public Procurement Authority (PPA) comes in. The Authority’s fundamental job is to monitor and improve contract management in the country. However, the report reveals that the Authority is severely failing to deliver.

According to the report, the PPA does not track contractors that have been debarred in the country, even though it advertises them on its website .

In an assessment report, the Ghana Anti-Corruption Coalition (GACC) wrote that “it was difficult assessing this commitment. The Public Investment Division of Ministry of Finance does not deal directly with contractors and as such cannot blacklist and debar contractors,” the report reads. “The institution capable of blacklisting contractors is the Public Procurement Authority (PPA) who is in charge of all procurement for state institutions.”

In Section 3 (q) of the Public Procurement Act, 2003 (Act 663) it states that the Authority must “investigate and debar from procurement practice under this Act, suppliers, contractors and consultants who have seriously neglected their obligations under a public procurement contract, have provided false information about their qualifications, or offered inducements of the kind referred to in section 32.”

In 2017, the Minister for Roads and Highways, Mr. Kwasi Amoako-Atta, threatened to blacklist contractors, but Corruption Watch found no measures have been taken since.

Meanwhile, the Minister of State in charge of Public Procurement, Sarah Adwoa Safo said last year that the Ministry was creating a database for contractors, consultants and suppliers who bid for government contracts, as well as develop software that will assess the performance of all such contractors. No such database exists.

“ “I think that there are a lot of issues that need to be dealt with,” said Dr. Justice Nyigmah Bawole, Associate Professor and Head of Department for Public Administration and Health Services Management, University of Ghana Business School. “They try to make maximum benefit with what they have. If you have to blacklist contractors, let’s be sure that the government is meeting their end of the deal.”

Another issue, says Charles Adams, the Director of Transportation Research Centre at the Kwame Nkrumah University of Science and Technology, is the constant change of governments.

“Government upon government I’ve seen one party start a [road] project then the next party stops,” said Charles Adams, the Director of Transportation Research Centre at the Kwame Nkrumah University of Science and Technology. “Contractors then take their equipment and then the project is left abandoned.”

Adams advises that government should tap into the private sector.

“We got to find the money and encourage private sector capital to help. I don’t think the government can truly rely on the Road Fund alone to fund it. We need to introduce the private sector.”

The Road Fund is a pipeline funneled by government to finance the maintenance and rehabilitation of all public roads in the country.

The fund is underpinned by government levies on fuel, road tolls, vehicle inspection fees, amongst others.

Additionally, Ghana receives funding from the World Bank through its Output- and Performance-Based Road Contract. The international financial institution created the contract because they understand that “rural access is among the most important infrastructure elements to stimulate economic growth in rural and remote areas.”

But to really get to the root of the issue, Adams restates and emphasises that “we have to bring public and private partnerships to fix the roads.”