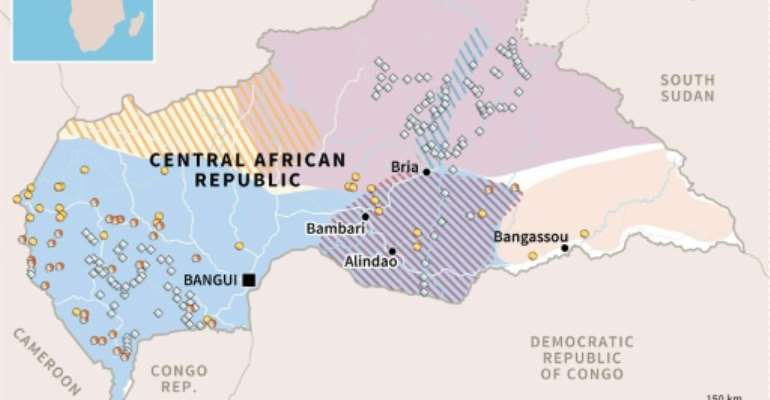 United Nations forces have clashed with a local militia in western Central African Republic (CAR), little more than two months after a deal aimed at restoring peace to the troubled country, the UN said.

Five members of the Democratic Front of the Central African People (FDPC) were killed after the UN peacekeeping force MINUSCA launched an operation against the group on Friday, according to an internal note seen by AFP.

The FDPC said it had lost three of its members.

MINUSCA "has launched discussions (with the FDPC), which are ongoing," the force's spokesman, Vladimir Monteiro, told AFP on Tuesday.

A UN peacekeeper was wounded in the fighting but left hospital on Tuesday, Monteiro said.

The UN accused the FDPC of setting up roadblocks at Zoukombo on Highway 1, the only road linking the capital Bangui to Cameroon, and of stealing a dozen pickup trucks.

The FDPC is one of 14 armed groups that signed a deal with the government on February 6 -- the eighth attempt to bring peace to one of Africa's most troubled and poorest countries.

CAR has been struggling to recover from the bloodletting that erupted when former president Francois Bozize, a Christian, was overthrown in 2013 by mainly-Muslim Seleka rebels.

Thousands have lost their lives, nearly 650,000 have fled their homes and another 575,000 have left the country, according to UN figures as of December last year.

Under the peace deal, armed groups were offered seats in an "inclusive" government -- a process that proved long and turbulent as militia chiefs demanded high-status positions.

The new government took office on March 22, but without FDPC leader Abdoulaye Miskine, who declined the ministerial post that was offered him.

However, one of his aides was named "special advisor" to the prime minister, and another was appointed prefect to the Nana-Mambere region in the west of the country.