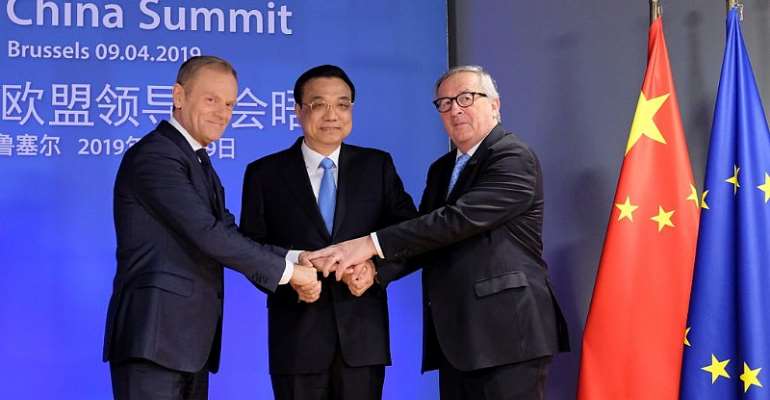 European companies should have the same rights in China as Chinese firms in Europe, European Commission head Jean Claude Juncker has said at the annual EU-China summit in Brussels.

The yearly gathering brings Beijing's number two leader together with the EU's top officials and serves as a litmus test on the state of ties between Europe and the Asian giant.

This year's meeting comes a month after the European Commission branded Beijing "a systemic rival" in a special 10-point report that stressed China's unwillingness to play fair on trade.

"The Commission has a new strategy ... and we are insisting that European firms in China should enjoy the same rights as Chinese firms in Europe," Juncker told a conference just minutes before his meeting with China's Prime Minister Li Keqiang.

The annual meeting, where little is actually decided, comes as Brussels is trying to better define its approach to the Asian giant on trade matters and security.

Concerns about the Belt and Road

A major concern for Europe is China's ambitious "Belt and Road Initiative" (BRI), a trillion dollar network of transport and trade links stretching from Asia to Europe.

EU powers such as France and Germany are growing ever more uneasy with project after populist-led Italy joined the scheme, becoming the first G7 member to do so.

It also underlined Europe's struggles to maintain unity among its 28 members when it comes to China, allowing the superpower to pursue one-on-one deals, especially with countries hungry for investment, such as Italy, Greece and eastern Europe.

Li Keqiang, China's Premier, will attend the “16+1” cooperation in Croatia's capital Dubrovnik, later this week, where 11 EU members come together with five Balkan states and China as part of the BRI.

The 16+1 cooperation started in 2012 and caused concern in Brussels as new EU members such as Hungary, Poland and the Baltic States made deals with Beijing without informing the EU's central authorities.

More powerful EU states also go out on their own with China.

Last week, French President Emmanuel Macron hosted President Xi Jinping for a summit, though he also invited German Chancellor Angela Merkel and the EU's Juncker for one leg of the meeting.

But while Tuesday's meeting may not yield anything new in the EU's complex relationship with China, European officials insist it still has value in keeping up the pressure.

"There is broad agreement within the EU that it is important to communicate to China that we are at a point where we want to see concrete steps forward on their willingness to work with us at the WTO," an EU diplomat told AFP.

"What is important is that we give a signal to China that the EU is partner but also a competitor and requires Beijing to make some steps."