An Epistle To Prof. Kwesi Yankah-Minister Of State In Charge Of Tertiary Education 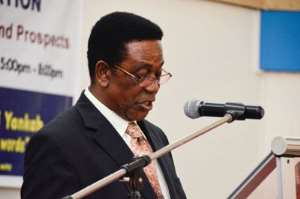 Sir, I bring you unadulterated greetings!

I am writing to you, this innocuous letter, vis-à-vis your pronouncement (that is, first degree being the minimum requirement to translate one into a teacher in Kwame Nkrumah's Ghana).

Sir, this letter has been necessitated against the backdrop of the following school of thoughts;

1. The first school of thought posits that there is no correlation between teachers' qualification and students' academic performance.

However, without any malicious intent against any of the aforestated thoughts, kindly hear me out, Sir. I want to say that, no matter how one looks at the issue, there is a direct bearing of a teacher's academic qualification on his students' performance. It is instructive to note that a teacher with diploma in English language cannot effectively handle students at the SHS level and this is true for the other subjects.

A cursory search on the internet gives a number of research works which corroborate the hypothesis that there is a direct relationship between a teacher's academic qualification and his or her students' academic performances. Therefore, the extent of your directive's consonance with many research works, I don't think you are out of place with this directive.

Again, the reason I agree with your pronouncement is that, apart from being the minimum requirement to teach, it also serves the teachers as an avenue to upgrade themselves. For instance, if I am a diploma teacher, then it will challenge me to go for my higher studies to gain my next qualification and it goes on.

Also, I wouldn't disagree with you because after I go for my higher studies and gain my next academic qualification, it will add some pecuniary value to my certificate. The payment system is in such a way that every level has a commensurate payment/ salary. I don't think any teacher wouldn't like to add some coins to their salaries. Here again, this directive, the extent of its consistency with our pay structure, is not out of place.

Finally, I think it will be a great achievement for any teacher to reach some enviable level in the academia. It is an enrichment to one's CV. When one is challenged with this directive, one can get there.

Therefore, generally speaking, this directive, when implemented well without any surreptitious motive, will serve the interest of the teacher. So, theoretically speaking, the extent that it brings some upliftment in the life of the teacher and a proportional academic betterment in the students' life, this directive is good, it is right and proper.

That notwithstanding, it has come to me as a surprise for you to think that the qualification of the teacher alone is the panacea to the perceived low academic performance among some students.

Sir, please let me point out the following to you;

There are more to it than meet the eye. There are so many factors to students' performance. Teachers' qualification is just one factor. I will tell you a few of them.

If a teacher has all the requirements and the needed materials and resources are not available, the problem will still persist. I have spoken extensively on this issue in my previous article. This is an excerpt "you have a country in which provision of TLMs is not a priority compared to hunting teachers for lesson notes. You have a country in which TLMs are sometimes provided at the tail part of the academic term/year when almost all the topics have been covered". It was not for a levity when TLMs are integral part of teaching- learning process. How can the qualified teacher teach effectively without the needed resources?

Sir, you said this directive is done in consultation with a department in the UK? Sir, please did you also find out how the classrooms and learning environment in UK are like? Did you see about three students perching on a monodesk? Did you see a classroom there as hot as the even? Did you see a classroom without fully furnished with technological gadgets? Did you see students moving from one classroom to another because of inadequacy of classrooms? Compare the level of infrastructure, materials and resources that both countries have before you talk about comparing academic excellence. Please when you are copying something from them, copy everything, I mean wholly. Don't pick those which will inure to your benefit and unfortunately leave the poor teacher to wallow in the quagmire of frustration.

The other day, it was your colleague, Prof. Stephen Adei, who descended on teachers without recourse to the hydra-headed challenges in the educational setting and how to proffer a robust solution to them. He insulted teachers and compared them to private school teachers. If his statement that private school teachers are better than public school teachers, then it renders your directive dead, null and void because the question is, how many of the private schools have diploma teachers? 90% are SHS leavers. How do you reconcile the two?

Just recently, Ghana was subjected to international opprobrium when teachers had to write examination questions on the chalkboard. Something that we have transcended long ago as a country? When innocent teachers raised innocuous concerns, your boss, Hon. Matthew Prempeh, descended heavily on them and told them to shut up, and that it was not something new. How many examinable topics can be captured on a small chalkboard for teachers to be able to assess students comprehensively? Unfortunately you and your boss saw nothing wrong with it. The sad aspect is that, he they do that with arrogance and sheer disrespect to hardworking teachers even though they are ignorant of the many challenges confronting the education system. But you see, ignorance with arrogance is an unmitigated fragrance of temprance.

Sir, it appears that the kind of proposal you are promulgating is like putting the cart in front of the horse. Can the cart pull the horse? It is the direct opposite of the normal practice of putting the horse in front of the cart. The teacher maybe qualified, but if the needed materials and some other related factors are not catered for, we will still be marking time.

If it is about qualifications only and nothing more, then Sir, your boss shouldn't be a Minister of Education because per your logic, he doesn't qualify. Your boss is a Dentist by profession, in fact a doctor, so why is he not in the Hospital, or probably the minister for Health? Have you ever thought of that?

In our legislature, we have a Hairdresser who is an elected Member of Parliament. Without disrespect to her and hairdressers, why is she there if it is about only qualification and nothing else? Have you thought of that?

Being president of a country is about economic manament. HE JJR, HE JAK, HE JEAM, HE JDM and HE NADAA are all not economists, but they have been presidents. If it is about qualification alone, then they shouldn't have been presidents. Has that ever crossed your mind? They were/ are presidents because the needed resources (human, land and capital resources), logistics and materials are available.

Sir, I believe you think you are performing because you have a fully furnished apartment (with a security, a gardener, a chef etc), an SUV or a V8 or an equivalent vehicle as your official drive and a saloon car as your informal drive, a fat salary, other allowances and stipends. Have you asked yourself about the conditions of teachers?

Sir, I want to leave it here by saying that, in the final analysis, teachers' qualification is undoubtedly good, but that alone is not the panacea, there are more pressing issues you need to deal with.

Thank you, Sir, for your time!