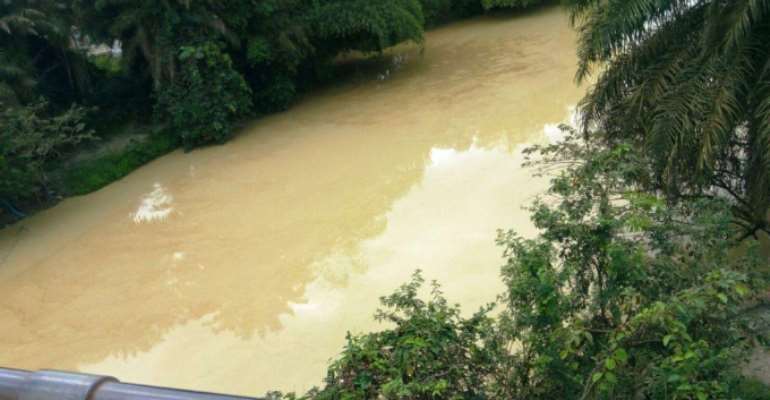 The story turned my stomach upside down and inside out – metaphorically speaking. It read:

“Locals report that illegal miners have resumed operations, due to the halt in monitoring of the IMCM [Inter-Ministerial Committee on Illegal mining]. The Ankobra River in the Ellembelle District of the Western Region, which recently regained its natural ecology as a result of the hard work by the Inter-Ministerial Committee on Illegal Mining (IMCIM) is getting turgid again.

“The river [was,] until the work of IMCIM, heavily polluted by the activities of illegal small-scale miners…The Ankobra plays a critical role in the lives of residents living along [its] banks. However due to … illegal small- scale mining, the River has lost all its significance. The Minister for Environment, Science and Technology, Professor Frimpong-Boateng, had said that [the] Government [would] need US400 million dollars to restore it. However, a series of efforts, including the setting up of the Inter-Ministerial Committee on Illegal Mining, were able to push back the illegal miners.

"The River has been very clean for some weeks now. We are very happy as we can now go back to fishing... and come back home with a lot of catch. We can also use it to cook now'', John Ndede a fisherman had said [at the time].

“Akua Ndoli, who has been a fishmonger all her life, had also said: "For a long time I had to move to Esiama to buy fish. But … in the past few weeks, I only have to come to the Ankobra [to] get quite a sizeable amount of fish to buy".

“[Another] resident, Samuel Eshun, had attributed the change to the work of [IMCIM]: "We are aware that some security men were chasing the miners and seizing their equipment. So the mining has stopped".

“[Now, April 2019], however, things are changing for the worse. The colour of the River is turning brownish [again] -- an indication that illegal mining has resumed along sections upstream. Fishermen who had earlier told newsmen of the success story, could not hide their frustration on Thursday, April 4, 2019.

"We don't know what is happening; the River is going bad again!. Now if you cast your net, you only draw mud or sometimes pull an empty net", Michael Essien lamented. He [added] that "from the look of things, it appears the [illegal] mining has resumed.”

“A group of young men who took newsmen on a trip on the Ankobra River, claimed that the documentary by Anas Aremeyaw Anas on galamsey, could be blamed for their woes. They observed that because the leadership of the Inter-Ministerial Committee on Illegal Mining is in disarray, some of the [galamseyers] have gone back." The illegal miners are taking advantage of the situation at the IMCIM to wreak havoc again", [they argued].” UNQUOTE

This is pathetic because I am sure this may NOT have been the situation that Anas Aremeyaw Anas wanted to create when he embarked on his investigation of IMICIM personnel. He said they had “stabbed the President in the back” by allowing themselves to be bribed in the course of approving individuals and companies for legitimate small-scale mining.

So Anas may have thought that he was assisting the work of IMCIM. But the undeniable fact is that he has only succeeded in – as the fishermen told the newsmen -- enabling the galamseyers to take “advantage of the situation at the IMCIM to wreak havoc again". At the very least, that is the perception of those at the receiving end of the ravages caused by galamsey; i.e. the populace that lives by the Ankobra.

Now, it is not for me to lecture Anas on the responsibilities that devolve around an investigative journalist. All I can do is to remind him that we need to weigh our objectives against hard realities. We are forced by circumstances to make choices. Our judgement, if not our conscience, can be called into question if we end up destroying what is in the public interest, instead of enhancing it.

Are we to tell the fishermen who believe that the galamseyers have “taken advantage of the disarray at IMCIM to wreak havoc” that their perception is wrong, or that they are being unfair to Anas? They are entitled to their conclusion; just as Anas was in deciding to target IMICIM’s personnel. The reverting of the Ankobra back to its “turgid”, brown, state is an inescapable fact. And inevitably, it will be the yardstick against which that particular investigation by Anas will be evaluated. Certainly, Anas has given cause to the state agencies that were reluctant to enforce the anti-galamsey laws, which seriously resennted the establishment of IMCIM, much cause to celebrtate.

MEANWHILE, quite a few people have taken me to task, on Ghanaweb, wqith regard to my article expressing disquiet at the Government’s decision to ban the importation of excavators into Ghana from 1 May 2019.

The ban seeks to prevent excavators from being used to wreak havoc on our rivers, streams and watercourses. But in my article, I pointed out that an unexpected consequence of the ban would be to create an artificial shortage of excavators in Ghana.

If the immutable economic laws of supply and demand spring into action, road and house-builders as well as those engaged in constructing clinics and schools, could face high inflation in the cost of the equipment they need to purchase – or hire -- for their work. I recalled that in the past, whenever shortages had occurred in sectors of the Ghanaian economy (because import licensing, for instance, had been introduced to conserve foreign exchange) kalabuletraders had jumped in to carry out hoardingand other nefarious trading practices that had harmed the economy. The kalabule practitioners usually made a killing and we cannot close our eyes to this aspect of our economic history.

In his comment, GHANAMAN THE REAL, didn’t agree with my argument. He wrote:

Quote: “As I can see driving [just] around Accra, there seems to be a glut of excavators lying idle and parked along the N1 Motorway (for example). [This is in addition to] all the ones seized around the country already.…A shortfall for any particular project can always be provided for, under the terms of that project, instead of the current free for all import of these machines, which disappear invariably onto galamsey enterprises only. So, for once Mr Cameron Duodu, you can just hold your guns. I think desperate situations need desperate measures”. UNQUOTE

Somebody else, KING ROB, wrote:

QUOTE: “Mr Duodu is asking whether the banning of excavators is the best way of stopping excavators from getting to galamsey fields. He has given reasons why banning them may not be the best idea, because of the unexpected consequences on the economy generally.

“If excavators are being smuggled to the galamsey fields, because the police and various Task Forces cannot STOP them, we have to find the answer. If they [excavators] cannot be stopped because of CORRUPTION, why not stop the corruption?

Or are we going to accept corruption for ever?” UNQUOTE

Another commenter, NANCY AMA, pointed out: QUOTE: “GHANAIANS LIKE TO BAN THINGS TOO MUCH! Whenever local industries produce [unsold] shoddy goods, they get govt to introduce import licence which brings about smuggling and INFLATION!

Can’t we learn from the derisory MADE-IN-HERE experience?