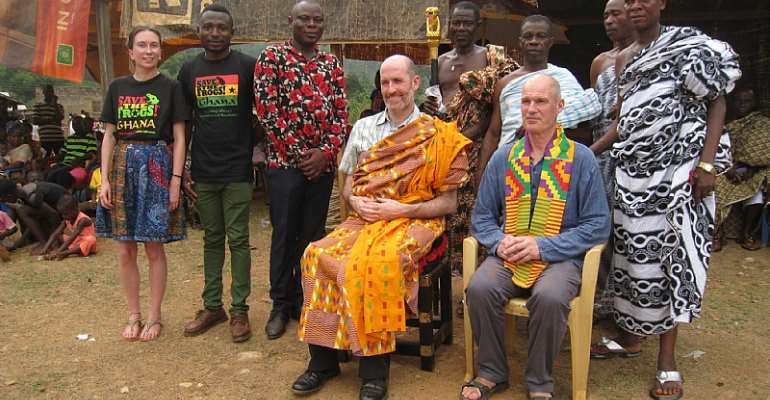 Kumasi, 9th April 2019 - A British renowned international nature conservationist, Mr. Julian Branscombe, has been made United Kingdom-Ghana Nature Ambassador. Mr. Branscombe was given this honorary title by the chiefs and people of communities surrounding the Sui River Forest Reserve in south-western Ghana. According to local customs, he was rechristened as Nana Kwame Branscombe.

The Nature Ambassador title is given to individuals who have contributed immensely towards nature conservation and promotion of eco-friendly social interventions “We conferred the title on Mr. Branscombe following his generous, substantial contributions towards protecting our ancestral forest and generating employment opportunities for community members. As our first international recipient, we congratulate him and hope he will continue to do more to help us in our struggle to see our forest resources protected for posterity” – His Royal Highness Nana Akwasi Agyemang Bosompem II, Paramount Chief of the Yawkrom Traditional Area.

Mr. Branscombe, a former Chief Executive of one of the UK’s foremost conservation organizations, Gwent Wildlife Trust, has been helping the local communities through the local non-profit organization SAVE THE FROGS! Ghana. “Mr. Branscombe has worked closely with me over the last two years to raise funds with which we have employed many people including women to raise seedlings and replant degraded areas of the forest” Gilbert Adum, Executive Director for SAVE THE FROGS! Ghana. “Julian’s support has also sustained our research work, which recently led to the recording of two 'pregnant' females of one of the world’s rarest and critically endangered species, the Giant Squeaker Frog” he added.

In appreciation for the honour done him, Mr. Branscombe said, “I am happy that I could make a contribution to nature conservation in a country whose forests and people I fell in love with some 30 years ago when I visited Ghana as a young Cambridge student. I will continue to render my support for conservation and as such, I’m establishing a UK charity called People and Wildlife Ghana to fundraise for this cause.”

Sui River Forest Reserve is regarded as the last stronghold for many threatened amphibian species including the critically endangered Giant Squeaker Frog (Arthroleptis krokosua). Like many forest reserves in the country, it’s under pressure from human activities including logging, farming, bush fires and mining. Since 2009, the local NGO SAVE THE FROGS! Ghana through community engagements with local leaders and people has raised awareness about the importance of the forest to biodiversity and humanity. These engagements brought about local transformations and a new aspiration to become a model community that lives in harmony with nature.

"You Were Not A Vice President When MoMo Was Introduced 11ye...
3 minutes ago