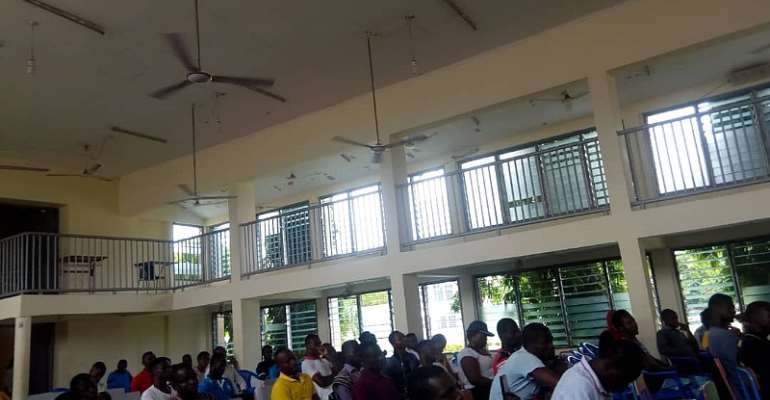 In an address to students at the University of Education, Mampong campus, Mr Solomon Ananpansah, the National deputy coordinator of the Tertiary Education Institutions Network(TEIN), the students Youth wing of the opposition National Democratic Congress(NDC ), noted with great concern, the increasing joblessness coupled with a lack of coherent and sustainable plan for the teeming Youth. A situation which has left many Youth disappointed in the government of Nana Akufo Addo and doubtful of the Presidents ability and willingness to deliver on his numerous promises of hope to the Ghanaian people, especially the Youth of the country in the run-up to the 2016 elections. This according to him, has led despair and increasing frustration among the Youth, who are unsure of what the future holds for them under the leadership of this government. He stated, "This government is a disappointment. The bad leadership under this Family and Friends government has left the youth of this country, including our friends on the other side, hugely disappointed and in despair of what the future holds for us"

Mr Ananpansah, who is a former National Union of Ghana Students (NUGS) programmes and projects secretary, also bemoaned the governments poor handling of the otherwise good Free Senior High School policy, noting that the introduction of the double track system will greatly affect the quality of education thereby endangering the future of the younger generation. "The introduction of the double track system in our Senior High Schools is killing the quality of education and will lead to the collapse of secondary school education", Mr Ananpansah stated in his address.

Mr Ananpansah charged the students to stand up against the bad leadership of the government of President Nana Akufo Addo which threatens to mortgage the future of the country. He called for action from the students in opposing and disposing the parochial rule of the Nana Akufo Addo which only benefits close friends and family of the president, to the neglect of the Youth and the masses. "Comrades, there comes a time where silence is a betrayal. As youth and intellectuals, we must stand up against the mortgaging of our future for the parochial interest of a few family and friends. We must oppose and dispose of this government comes 2020", Mr Ananpansah stated.

He further stated that, the NDC party and President John Dramani Mahama, with their massive record in infrastructure, will focus on sustainable Job creation, Youth training and Youth development when the return to power in 2020. He stated, "let me assure you all that with our massive unchallenged record in infrastructural development in the forth republic, the next NDC and John Mahama government in 2021 will focus on sustainable job creation and Youth development"