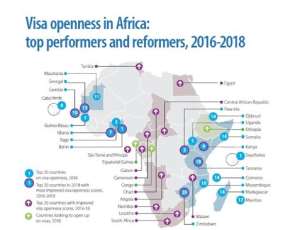 The 2018 Africa Visa Openness Report which employs an index to measure how open African countries are when it comes to visas by looking at what they ask of citizens from other countries in Africa when they travel.

The Africa Visa Openness Index tracks changes in country scores over time to show which countries are making improvements that support freer movement of people across Africa.

By 2016, across the continent, Ghana made the most progress in opening up its borders for other African travellers, moving into sixth place in the Index, up sixteen places from 2015.

So figures from the 2018 report show that only one country in Africa requires a visa to come to Ghana, 17 countries do not require visa whiles 35 other countries must get visa on arrival.

The country now offers 96% liberal access to all Africans. This is either through visa-free access to almost a third of all countries (including for the other 14 ECOWAS member states) or visas on arrival to almost two thirds of countries in Africa (from less than 10% in 2015).

Ghana’s policy decision follows a resolution adopted in early 2016 at the AU’s Executive Council on issuing visas on arrival for member states, with the possibility of a 30-day stay.

During the State of the Nation Address on 25th February, 2016, former President John Dramani Mahama announced the new directive.

“With effect from July this year, we will be allowing citizens of AU Member States to enter our country and obtain visas on arrival with the option to stay for up to thirty days and experience what our country has to offer. This measure, with time, should stimulate air travel, trade, investment and tourism.”

This tied in with Ghana’s pledge to support the continent’s wider integration efforts and Agenda 2063, including through forging stronger links with its Francophone neighbours. 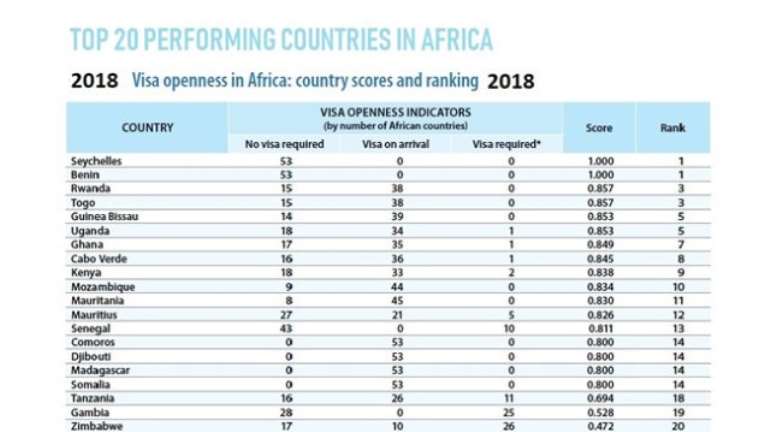 Other Findings in the Visa Openness Report

African countries on average are becoming more open to each other, with indications that travel within the continent is getting easier.

Compared to 2017 and 2016, progress has been made in 2018 against visa openness indicators because Africans currently do not need a visa to travel to more countries than in previous years.

However, the fact that Africans still require visas to travel to just over half of other African countries shows more progress is needed to realize free movement of people continent-wide.

Seychelles and Benin remain the top performing countries on visa openness with Benin moving from the 27th position in 2016 to sharing the top spot in 2018 with Seychelles which has been very open since the start of the report in 2015.

Rwanda and Togo with same point accumulation share the third spot. Then Guinea Bissau and Uganda at shares the fifth spot.

Due to the performance of Benin, Ghana has moved from the sixth position to the seventh position in 2018.

Libya, Suban, Equitorial Guinea and Western Sahara occupy the last spots; 52, 53, 54 and 55 respectively, meaning it is difficult getting moving into these countries.

When business people and traders move more easily across the continent, thanks to liberal visa policies, they bring higher levels of investment, fresh skills and expand the range of goods and services on offer.

President of the African Development Bank Group, Akinwumi A. Adesina, indicates that being able to freely move and do business among African countries is critical to the integration agenda.

“Regional integration and trade based upon the free movement of persons, goods, services and capital is at the core of the business of the African Development Bank… we must accelerate investments in regional and national infrastructure, especially, to boost connectivity, reduce costs and raise competitiveness.”

Meanwhile, 18 of the top 20 countries are low income or lower-middle income economies. All the top 20 most visa-open countries (where data is available) have an upward trajectory on travel and tourism figures on GDP, visitor exports and investments.

18 of the top 20 most visa-open countries improved their overall performance in the World Bank Group’s Doing Business 2018 ‘distance to frontier’ measure, showing how economies are becoming more open.

Half of the top 20 most visa-open countries have an upward trend of real GDP growth.

Africa is the world’s second fastest growing region. Deepening regional integration to include free movement of people, capital and services is a priority to help meet Agenda 2063 and reach the UN’s Sustainable Development Goals.

Greater regional mobility opens up opportunities for SMEs and young people by expanding their horizons Africa-wide.

Progress is being made at regional level to allow free movement of people, but there is still a way to travel. Visa-free access for other member states continues to vary across Africa’s Regional Economic Communities (RECs).

Four of the top 20 improvers moved into the top 20 countries between 2016 and 2018, showing how a decision to liberalize visa policies has had an immediate effect on scores and rank.

So, what’s next for visa openness in Africa?

The AfCFTA was signed by close to 50 countries at the AU Summit in March 2018, alongside the Free Movement of Persons Protocol. It creates one African market of 1.2 billion people, with a GDP of US$2.5 trillion that has the potential to boost intra-African trade by 52% by 2020, benefitting African producers, consumers and traders.

Together with progress on the continent’s infrastructure needs and business reforms, visa openness represents a valuable win-win policy tool that will help to bolster integration.

The developments on Free Movement of Persons pave the way for countries to take steps towards allowing African citizens rights of residence and establishment. The Single African Air Transport Market is expected to improve air connectivity that means faster, cheaper and accessible travel across Africa.

An Africa with open borders and open skies is open for business. Removing obstacles for Africans to visit, explore, and invest in the continent fits into this context.

More countries are putting in place visa-free or visa-on-arrival access to catalyze tourism and attract investment, alongside measures to improve their business environment.

“Economic integration thus responds not only to aspirations born out of Pan-Africanism, but also to a practical imperative linked to the economic viability of the continent… Our peoples, our business community and our youth, in particular, cannot wait any longer to see the lifting of the barriers that divide our continent,” says African Union Commission Chairperson, Moussa Faki Mahamat.

The report shows at a glance which countries are facilitating travel for citizens of other countries and how: whether they allow people to travel to their country without a visa, if travelers can get a visa on arrival in the country or if visitors need to get a visa before travel.

In future editions, the Report will look at how countries are facilitating visa openness by cutting time, reducing costs, or simplifying the visa process as well as how far a visitor’s experience on the ground matches up to the agreements or visa policies in place on paper.