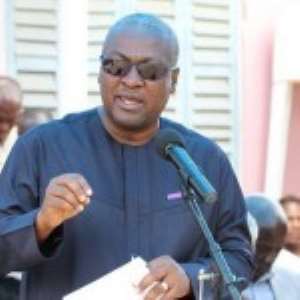 I understand the NPP lead by their disoriented general secretary, John Boadu in desperation to set an agenda for the week to obviously sway Ghanaians away from the lies told by Dr. Bawumia and the records set straight by Hon. Adongo had to shabbily organise a press conference on Sunday at the time they should be in Church pleading for forgiveness from their maker.

In the said press conference it came out that their sole agenda was to once again discredit the former president John Mahama who is on record to have proven to Ghanaians that, he was actually on the track to leading them to prosperity but for the lies of Nana Addo and Bawumia.

However, it came out that, the said press conference suffered from jaundice and they had to just find something to tell the journalist who were becoming disappointed. John Boadu with sunken eyes then had nothing to say but to tell Ghanaians to reject the "Redenominated Mahama" in 2020.

Wow! Lol.. The NPP will never cease to amaze me. They are always exposing the Ghanaian, the presidency and governance in Africa to global ridicule.

In 2007, this same NPP lead by former president Kufour with Nana Addo as cabinet minister told the whole world the cedi then had lost its value and needed redenomination. The argument was that the redenomination would make the cedi stronger and more competitive in global trade. They went ahead and the redenomination was successfully done.

Fast forward in March, 2019 at the town hall meeting lead by the serial liar Dr Bawumia, he conveniently decided to quote rebased 2018 GDP figures and compared them with 2012 - 2016 non-rebased figures in an attempt to paint a brighter picture of his failure to manage the robust economy handed him just to years ago making the Ghanaians cedi the worst performing currency in the continent today. Bawumia recognises the fact then that, rebased figures like redenominated goods are better that non-rebased and depreciated personalities.

The inconsistencies and confusion in NPP is now clear and its clear they are clueless when it comes to governance and the economy. I least expected John Boadu to make reference to the word "redenominated" just a week after his vice president has accepted that redenomination like debasing is better.

We will decide in 2020 based on our pockets but not what John Boadu tells us. And we are definitely settling for "Redenominated Mahama" and reject the "Super Depreciated" Nana Addo.