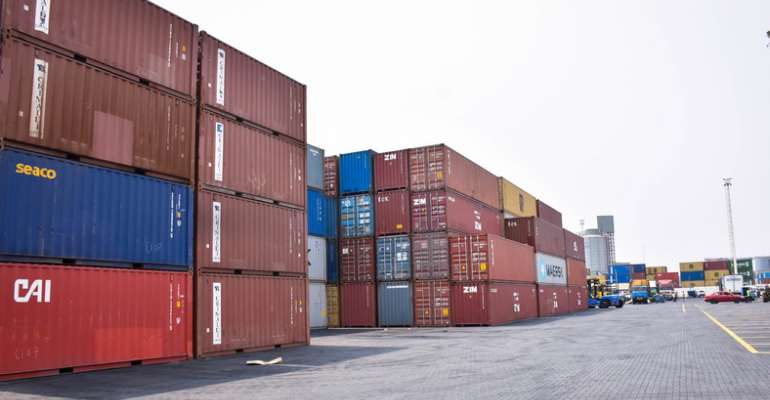 The President of Ghana, His Excellency Nana Addo Dankwa Akufo-Addo and his Vice President, His Excellency Dr Mahammudu Bawumia, after listening to, and extensively secretly deliberating about the concerns raised by Ghanaians regarding the excessive import duties taxed or paid on goods arriving at the Ghana ports, came out with a well thought-out solution. They have announced the reduction of 50% on imported goods and 30% on imported cars respectively, into the country.

Their final decision could have been informed by the ridiculously heavy import duties placed on imported goods into the country at the nation’s ports. This has given rise to, and encouraged, smuggling and all sorts of collusive acts of corruption at the ports between custom officers and certain importers with their agents and assigns effectively participating in such nefarious and detrimental acts.

The extortionist import duties at the ports have over the years enriched certain people like the custom officers, politicians in government and their cronies. At the same time, it has led to the death of some importers and deprived some of their goods hence rendering them paupers in the end.

It is an open secret dating from the Rawlings’ Provisional National Defence Council (PNDC) military junta era through the NDC to NPP that the heavy import duties have paved illegal way for certain politicians and governments to intentionally, criminally usurp the imported goods, especially luxury cars, belonging to genuine importers. When they deliberately inflate the duties to be paid on the cars and in the event of the importer not being able to afford it, the government and their agents and assigns end up auctioning such goods at a tenth of the money asked to be paid as import duty on the impounded goods to their secretly selected cronies or political party members. This has been the nonsensical open secret thievery going on at our nation’s ports. Nobody, I emphasise that nobody, conversant with the corruption that goes on at the ports and who wants to be truthful to themselves and the nation can deny the veracity of my assertion.

Having come to the realisation that this act is doing us no good as a nation, depriving genuine persons of their properties, making imported essential commodities difficult to afford by the ordinary Ghanaian, the listening President, His Excellency Nana Addo Dankwa Akufo-Addo, unlike his "Yen ntie obiaa" predecessor, former President John Dramani Mahama, has implemented the policy of immediate reduction in import duties.

Ghanaians, as usual, depending on their diabolical political allegiance and affiliation, selfish interests or collective interests of the masses, have received the announcement with sorrow and joy at the same time. As some people are jubilating that the reduction in the import duties has come as a relief to alleviate their worries of paying high prices for the items they purchase on the market, others have read deeper into it.

Some political opponents feel that the reduction as embraced by many, will be detrimental to their chances of winning any near future elections. Therefore, they will do whatever it takes to paint it black, alleging that it was only for NPP’s political expediency but not deeply based on the government’s inner interest and concern for the welfare of Ghanaians. This assumptive explanation is to me bollocks!

There is another group of people saying there should not have been any reductions at all. For them, the reduction in import duties will only encourage Ghanaian so-called businessmen and women who are merely distributors of finished products but not producers, to import more of their substandard cheap made-in-China products into the country to kill the local industries. The local or home industries cannot produce at competitive prices hence they will be thrown out of business all to the demise of Ghana in the long run.

Ghanaians for awkward reasons bordering on ignorance and lack of patriotism, have a deep-seated hatred for patronising their made-in-Ghana goods. They rather prefer second-hand goods through to used-ladies underwear imported from abroad to their brand new products produced in Ghana. This is madness! Therefore, to this group of people, the reductions in import duties should not have come at all, or they should have been selective or discriminately. There should be no import duty reductions on goods of which some are produced locally in Ghana but rather such goods should have attracted higher import tariffs to make those produced locally become competitive on the market. They have a good reason here. Nevertheless, the problem is the Ghanaians themselves. They are so myopic to have no love of the country at heart but rather see everything coming from abroad as superior hence have cultivated taste and preference for them.

By our deplorable Ghanaian attitudes that have clouded our senses of seeing and reasoning as rational human beings, we shall forever remain underdogs to our White contemporaries, suffer Chinese neo-colonisation and continue to die prematurely and from unexplained causes and illnesses.

Finally, from a publication on Ghanaweb as under their Business News column of Friday, 5 April 2019, as per the web link below, and titled, “Don’t be overexcited; 90% of imports not part of benchmark value – AGI”, I cannot get my head around it.

The Chief Executive Officer of the Association of Ghana Industries (AGI), Seth Twum Akwaboah, has expressed his views on the reductions in import duties. He is not keen about it since it did not go far enough if I understand him very well. He says in part of his argument, and I quote, "It’s rather the benchmark value that they’ve reduced by 50%. Let’s ask ourselves what the benchmark value is. The benchmark value only comes into play when there is dispute over your value. If you import things and there is no dispute over the value you’ve declared [Transactional value], you pay the applicable duty……"

For him, the announced reductions in import duties are simply fake; just to throw dust into the eyes of ignorant Ghanaians or importers who have no clue about how things work at our Ghana ports. I am a bit confused here and I require more education from Mr Seth Twum Akwaboah. How can there be any dispute over the value of your imported goods leading to the point of garnering you a reduction of 50% or 30% in your said declared goods? How does the dispute come about? How is the true declaration of the value of one’s imported goods ascertained to avoid profiting from the announced reductions at the expense of other importers? I can keep on asking certain pertinent questions until I get convincing response from Mr Seth Twum Akwaboah but it is irrelevant at this point in time of writing where I have no much time on my hands.

I have researched and understood what benchmark value is and how it applies in the economies of countries and even in the academic field where groups of students from same country or different countries are being assessed and assisted to perform better. Nevertheless, I shall not delve deeper into it but to wait for answers from Mr Seth Twum Akwaboah.

Did the Vice President not mention that the higher import duties imposed in Ghana encourages smuggling across the nation’s borders since most, or all, of our neighbouring countries, have lower import duties? To arrest this canker with its concomitant economic hardships brought to bear upon the ordinary Ghanaians, there must be prudent reductions in import duty tariffs? Have the decisions by the President and his Vice not been benchmarked here? Did they not use comparisons to arrive at their decision? As said, I shall not be dwelling on the details of the dispute and benchmark as propounded by Mr Seth Twum Akwaboah to render nonsense and ineffective or deceptive the announced import duty reductions by the NPP government.

I shall advise that Ghanaians start being more patriotic to patronise our own locally produced goods that we call “Made in Ghana”. By purchasing our locally made goods, the industries can get profit to improve upon the quality, reinvest to create more jobs for the worryingly teeming unemployed in the nation. If we are ourselves not proud of the goods we produce, who do we expect to buy them and how do we expect industries to spring up to create jobs for the youth?

Is the locally produced Ghana rice not 100% better than those made of plastic from China and the other Asian countries as seen on YouTube and witnessed by some Ghanaians? On my return trip from Ghana in March 2019, I bought about five kilos of produced in Ghana rice directly from a rice mill in Juaben in Ashanti, my maternal place of birth.

Please, let us appreciate what we have and have gotten from the announced import duty reductions. We start from one before we go to two. We start from somewhere to end up somewhere else. There are challenges but when we put our heads together and co-operate as we should without letting to manifest our selfish and nonsensical diabolic political quests, we can resolve the nation’s problems to the benefit of all.

We do not appreciate the value of what we have until we have lost it! Let us appreciate the efforts being made by His Excellency Nana Addo Dankwa Akufo-Addo to develop Ghana and cease our petty malicious political squabbles.