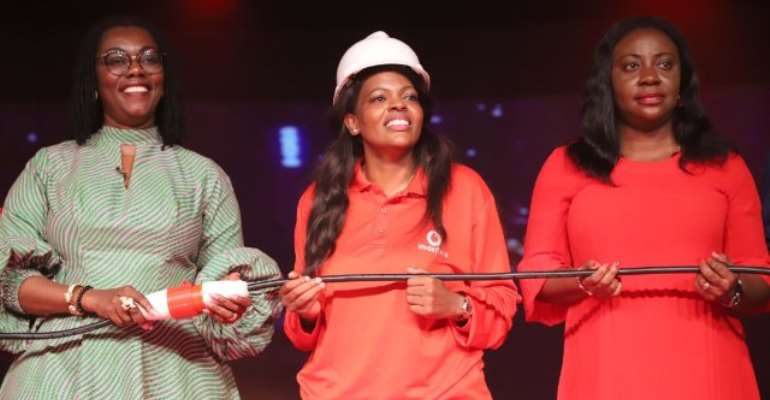 Executives of Vodafone during the 4G launch

Vodafone Ghana says it is not against listing on the Ghana Stock Exchange (GSE) for Ghanaians to benefit from the fortunes of the company but it is under no obligation to do so.

This was in response to a call by the CEO of GSE, Kofi Yamoah that government should compel Vodafone to list on the bourse after acquiring the 2x5MHz lot in the 800MHz spectrum band for 4G recently.

He argued that when Ghana Telecom was sold to Vodafone in 2008, part of the conditions was that it will list on the GSE for Ghanaians to benefit from its fortunes, but till date that has not happened.

According to him, the acquisition of the 4G license, which requires Vodafone to offload 25 per cent shares to Ghanaians, sets the tone for government to now compel the company to do what they should have done years back.

But in a rebuttal, Vodafone said whereas it had no aversion to listing on the bourse, the licensing conditions for the 800MHz spectrum it acquired recently, does not obligate the company to list on the GSE.

“The 4G LTE licensing conditions does not mandate licensees to launch an IPO on the GSE and nowhere in the bid documents or the license condition is a reference even made to a listing,” Vodafone said.

Vodafone again noted that whereas the licensing conditions required licensees to ensure 25 per cent Ghanaian ownership, that does not apply to them because 30 per cent of the company is already owned by government.

“This said, Vodafone places on record that it has no aversion to a listing, or for accommodating local participation in the company’s fortunes…” it said.

Vodafone Ghana’s External Affair Director, Gayheart Mensah added that “Our continuous successful partnership with government and the business’s investment in spectrum, infrastructure, products and services and in our staff are proof of Vodafone’s commitment to Ghana…”

Indeed, regarding commitment to local partnership, the immediate past Vodafone Ghana CEO, Yolanda Cuba recently said the company is weighing a number of local partnership options, particularly in the 4G space.

The company initiated a local partnership deal with leading BWA operator, Surfline Communications, but that deal was stalled by the regulator for alleged lack of regulatory framework.