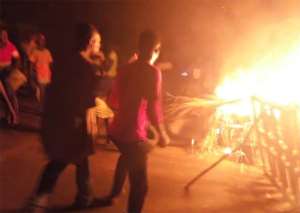 Six persons out of a total of nine arrested during last Wednesday’s demonstration over the frequent power outages across the Somanya – Odumase Krobo area in the Eastern Region have been remanded.

Some angry youth from Yilo and Manya Krobo municipalities went on rampage, burning tires and blocking roads in the area in protest over power cuts.

Nine persons including two pupils were arrested a while after tempers calmed.

At the Odumase District Court on Friday, 5, April 2019, His Lordship Frank Gbegby remanded the six persons brought before him for trial.

Nusao-based Abas and his uncle Daniel claimed they were not part of the exercise but were arrested by the Odumase police when they were going to move their vehicle from a washing bay.

According to the two, they came to meet the demonstration ongoing and decided to pack the vehicle at the bay for its safety so they would come to pick it later when calm is restored.

The prosecutor, DSP Akwasi Yeboah, prayed the court to extend the remand duration for two weeks so he could have enough time for an investigation into the matter.

His Lordship Gbegby however, did not grant the plea.

The police report after the incident said two persons were injured as a result of a gunshot.

Meanwhile, three more people are also a victim of the Wednesday gun shooting incident and two are currently under treatment at the St. Martin’s De Pore Hospital at Agormanya in the Lower Many a Krobo Municipal.

The third person for apparent fear of arrest has decided to stay home and undergo traditional treatment.