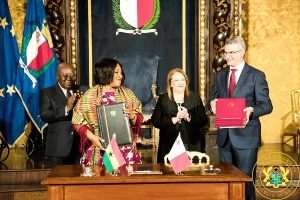 The Ministry of Foreign Affairs and Regional Integration has refuted some media publications about a supposed visa waiver deal signed between Ghana and Malta during a Government delegation visit to the European country.

Explaining what really transpired, the Foreign Affairs Ministry explained that the visa waiver agreement deal does not extend to the general public but rather only applies to holders of diplomatic and service passports on official duties.

The press release from the Ministry of Foreign Affairs also indicated that the agreement will come into force after both countries have been notified on the existing national legal procedures involved.

“It has come to the attention of the Ministry of Foreign Affairs and Regional Integration that some media outlets are disseminating information that the Government of Ghana and Malta have signed a Visa Waiver deal during the recent state visit of President Nana Addo Dankwa Akufo-Addo to Malta.”

“For the avoidance of doubt, the Ministry wishes to make it clear that the Agreement on the visa waiver which was signed during the state visit applies only to holders of diplomatic and service passports on official assignment to the two countries. The agreement will come into force after notification of both parties of the completion of the required national legal procedures,” the statement added.

The Ministry of Foreign Affairs, said some of the Memorandum of understanding agreed between the two countries included:

i. Agreement on the Avoidance of Double Taxation and the Prevention of Fiscal

Evasion with respect to Taxes on Income between the Governments of Ghana and Malta;

Agreement on the Waiver of Visa Requirements for holders of Diplomatic and Service Passports between the Governments of Ghana and Malta;

ii. Memorandum of Understanding on Bilateral Air Services Agreement between the Governments of Ghana and Malta;

iv. Memorandum of Understanding on Tourism between the Governments of Ghana

V. Memorandum of Understanding on Medicine between the Governments of Ghana and Malta.

Media houses may wish to contact the Ministry of Foreign Affairs And Regional Integration for further clarification on the Agreements and Memoranda of understanding, if necessary.

President Nana Akufo-Addo on 25th March, 2019, left Ghana for a 1-day official visit to Malta, at the invitation of Malta’s President, Marie-Louise Coleiro Preca, who was one of the first foreign leaders to pay an official visit to Ghana, under the Akufo-Addo presidency, on 26th July 2017.

The reciprocal visit was aimed at deepening and strengthening the ties that exist between the two countries, as well as exploring other areas of co-operation for the mutual benefit of the countries.