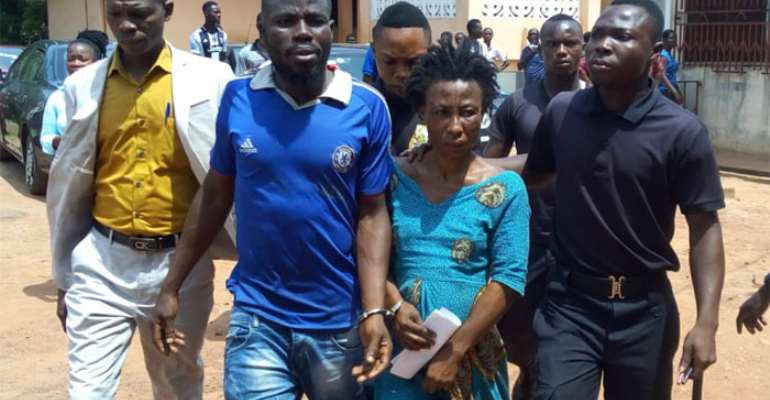 The gender court in Sekondi has ordered Mawusi Rose Fiaku, the 42-year old woman who is standing trial for allegedly stealing a one-year-old baby in Takoradi check what's wrong with her mind.

The move is to determine whether she is mentally sound.

This was after the mother of the accused confirmed to the court that her daughter sometimes behave as if she is mentally unstable.

It would be recalled that at the last court sitting, the accused claimed she was pregnant and the judge, Abena Agyin Doku, told her that the police would have to conduct a pregnancy test for confirmation before the next adjourned date.

At the sitting on April 5, 2019, the judge told the accused that her pregnancy test was negative.

She asked the accused whether she had been pregnant or ever had a child in her life and the accused answered in the negative.

“So why did you tell the court the other time that you were pregnant and had a child? Do you have a mental problem?”, the judge asked.

The mother of the accused who was in court asserted that her daughter sometimes acts as if she is not sound mentally.

The judge then ordered the accused person to see a psychiatric for checkup before the next adjourned date.

Meanwhile, the alleged boyfriend of the accused, Lawson Lartey, who is facing a charge of abetment, was granted a bail in the sum of GHc10,000 with two sureties.

The two accused persons are to reappear before the court on April 26, 2019.

Rose Fiaku had pleaded guilty to the charge of child stealing but Lartey had denied any wrongdoing.

The suspect, it would be recalled, managed to steal the one-year-old baby boy from his mother at about 4:30pm in front of the Market Circle Post Office in Takoradi in March 2019.

She initially posed as a customer and reportedly asked the baby’s mother to allow her handle her two kids to enable her to serve the customers better.

Fortunately, a closed circuit television (CCTV) camera of some banks in the area captured the suspect who was cuddling the baby as she moved away from the market.