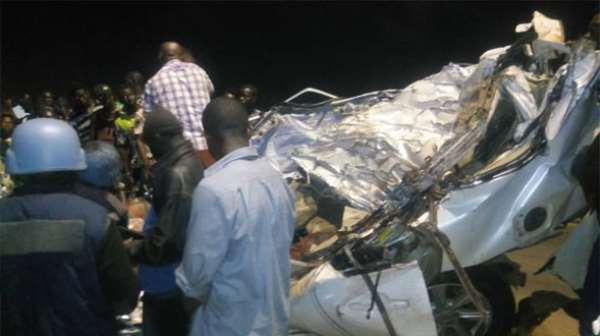 The accident occurred around the Kpone Barrier in the Kpone-Katamanso District of Accra when the driver of a Toyota Highlander with registration number GW 2733-18 lost control and crossed to the opposite lane, crashing into a truck.

The two drivers of the accident vehicles lost their lives instantly and their remains had been deposited at the Tema General Hospital morgue for preservation and autopsy.

The injured persons were also rushed to the same health facility for treatment.

According to eyewitnesses who spoke with DAILY GUIDE, two persons were on board a water tanker vehicle with registration number GT 8454 – 11, which was on its way from Aflao to Tema Motorway Roundabout after it had supplied water to a water company around the barrier.

The other accident vehicle – a Toyota Highlander – was coming from the Tema direction to Kpone with three persons on board, including the driver.

“The driver of the Toyota Highlander who was identified as Fred Boakye, a resident of Kpone, entered the lane of the oncoming vehicle resulting in a crash. The water tanker trapped and dragged the Highlander from the spot of the crash to about 150 metres before it halted,” according to eyewitnesses.

People rushed to the scene before the police came to remove the injured persons from the mangled vehicles.