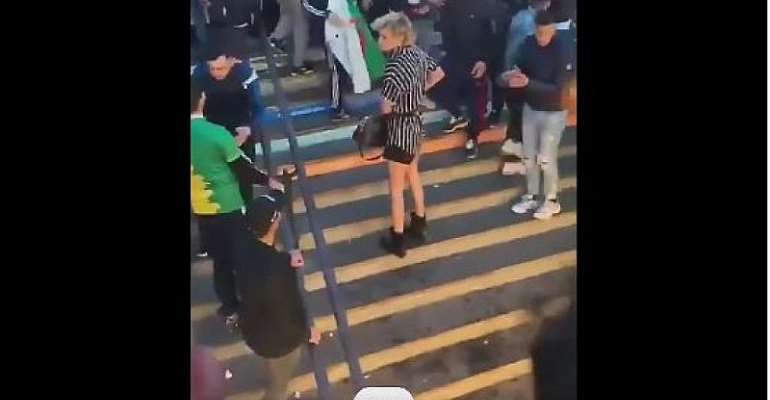 A video of an attack on a transgender woman in the centre of Paris has gone viral, and prosecutors have opened an investigation into violence committed on the grounds of gender identity. The attack on Sunday was on the margins of a demonstration of a demonstration against Algerian president Abdelaziz Bouteflika.

In the video, the woman is surrounded by people wearing Algerian flags on their shoulders as she comes out of the metro station.

She is jeered at as she climbs the stairs, and at one point a man punches her, while another kicks in her direction. A woman wearing an Algerian flag appears to intercede before a team of metro security officials escort the woman away.

Speaking about the incident to French media, the woman, identified as Julia, said she had exited the metro station after being harassed by people inside. The physical attack happened outside, as she tried to make her way through the crowds.

Security forces helped her down the stairs, throwing teargas canisters to disperse the crowds, she said. But they, too, harassed her, calling her “sir” and telling her that if she had not been wearing a skirt, she would not have had any problems.

Prosecutors opened an investigation into "violence committed on the grounds of sexual orientation and gender identity.” One person had been detained but was later released.

On Tuesday Julia herself filed a complaint for sexual assault, a decision she hesitated to make, she told French television BFM. The fact that the incident was filmed encouraged her.

The incident has prompted criticism of trans- and homophobia from France's Muslims, as it happened on the margins of the Algerian demonstration. But Julia has insisted on not mixing the issues.

Marlene Schiappa, the government minister in charge of gender equality fighting discrimination, tweeted that homophobia and transphobia are "not opinions" but expressions of "ignorance and hatred".