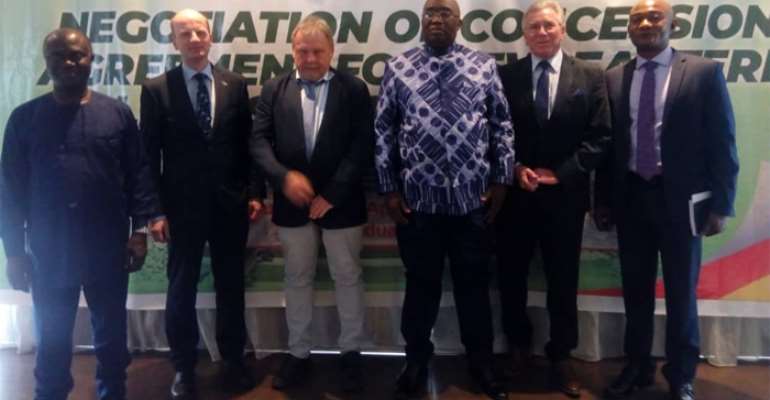 Joe Ghartey (3rd right) in a photograph with the investors, Prof. Baffour and his deputy

Works on the $2.2 billion Eastern railway line are expected to commence soon, DGN Online can confirm.

The investors under the Ghana-European Railway Consortium have signaled that they are ready to begin works as soon as Parliament and Cabinet approve the deal.

This came to light at the launch of the commencement of negotiation of concession agreement for the Eastern standard gauge.

Government is to take a minority share of the deal.

The project is expected to be 24 passenger trains and six freight coaches upon completion of the 340 kilometres construction.

The line links Tema, Accra and Kumasi and it is expected to boost economic activities especially at the Boankra inland ports upon completion.

The construction process, DGN Online gathered, is expected to last for three years and the Consortium “hope the project will be a shinning example of Ghana-German corporation, with the Ghana-European Railway Consortium which is undertaking the project, pledging to start work in earnest.

There will be six main stations, 34 substations on the track which is a double line, with the Consortium hoping to recoup its investment within 27 years after the three years of construction.

Minister of Railway Development, Joe Ghartey, says the project is a Build, Operate and Transfer (BOT) deal and that the concession would be given for a certain number of years.

He stated that ” the railway that they are seeking to build is a modern railway. “

According to him, “I believe strongly that the railway sector will transform our nation in ways that I and you have not thought about yet.”

The elated Minister indicated that the outcome of the negotiation would be forwarded to Cabinet for approval and that afterwards it will be sent to Parliament.

A member of the Consortium, Heinz Kroczek described the project as ” it is a nation-building project.”

During the construction phase, he noted that about 5000 jobs would be created.

An additional 3,000 jobs are expected to be created.

Aside the 8,000 jobs linked to the construction and post construction, an additional 540 jobs are to be created through the establishment of a rail slippers factory which is expected to manufacture 1,000 slippers daily.

Ghanaians, he noted, would be trained in Germany as part of the deal.

The last time a train traveled from Kumasi to Accra was in 2001.

The Eastern line and the entire railway sector was dormant until the New Patriotic Party (NPP) Government came to power in 2017.

President Akufo-Addo during his third State of the Nation’s Address on February 21, 2019 announced that a total of $1 billion had been allocated to the development of the sector, with $500 million of that amount expected to go the Western line and $500 million for the Kumasi-Paga stretch.

Minister for Planning, Prof. Gyan Baffour explained that government aims to revamp the rail sector in the country.

He indicated that enhanced and integrity transport network was essential for economic transformation and mobility.