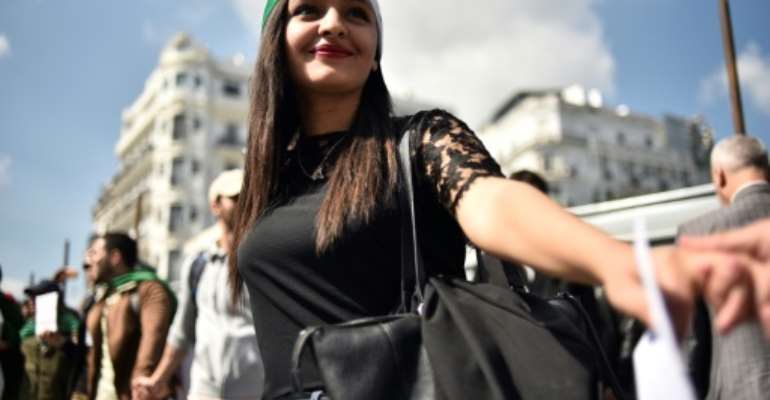 Algeria's protest leaders say that the departure of veteran president Abdelaziz Bouteflika is not the end of their struggle. By RYAD KRAMDI (AFP)

Algerians are planning mass protests Friday in a key test of whether they can keep up the pressure for sweeping reforms following ailing president Abdelaziz Bouteflika's resignation.

Opponents of the old regime have taken to social media calling for a massive turnout, targeting a triumvirate they dub the "3B" -- Abdelakder Bensalah, Tayeb Belaiz and Prime Minister Noureddine Bedoui.

The Bouteflika regime stalwarts have been entrusted to oversee the political transition after the veteran leader finally stepped down at the age of 82.

Bouteflika quit late Tuesday after weeks of demonstrations against his bid for a fifth term in office. He had lost the backing of key loyalists including armed forces chief Ahmed Gaid Salah.

Belaiz, a minister for 16 years, was named by Bouteflika as head of the Constitutional Council which regulates elections.

Bedoui, until his appointment as prime minister, had served as interior minister -- or, as the French-language El Watan newspaper put it on Thursday, "chief engineer of electoral fraud".

Critics say all three have always been faithful Bouteflika servants, who should follow his lead and resign.

Lawyer Mustapha Bouchachi, one of the leading voices of the protest movement, urged Algerians to continue protesting "until they have all gone".

"Our victory is partial," he said in a video posted online. "Algerians will not accept that symbols of the regime... lead the interim period and organise the next elections."

Protesters are calling for transitional institutions to be set up to implement reforms and guarantee free elections.

He said the only winner of this tussle would be Bouteflika and his entourage.

But Geneva-based political scientist Hasni Abidi said "the Algerian street has become has become a new player" in the country's politics.

Algerian newspapers have also focused on the role of the military in the transition period.

The French daily Le Soir d'Algerie asked how the armed forces would react in the event of continuing protests.

It asked: "will the military institution put all its weight into imposing strict compliance with the constitution... or push for another consensual political outcome?"

"How to use the transition," read a headline in El Watan, next to a drawing of General Gaid Salah, with a whistle in his mouth, leading protesters down a path dubbed "constitutional order".

Despite abandoning Bouteflika, the army chief is still seen among protesters as one of the key members of the "system" after the president appointed him to the post in 2004.

Liberte, another newspaper, said many Algerians saw Gaid Salah as having backed Bouteflika almost to the end, "even endorsing the option of a fifth term, and only broke away after the street scuttled him."