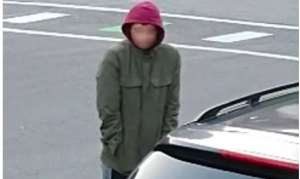 Timmothy’s father left him at school on the day he disappeared.

His mother Amy Fry-Pitzen picked him up and took him on a three day minibreak, before killing herself.

He then claims he ran across a bridge from the Ohio side of the city to the Kentucky side. An official report said:

‘One had black curly hair, Mt. Dew shirt and jeans & has a spider web tattoo on his neck.

The other was short in stature and had a snake tattoo on his arms.’ Timmothy said the men drove a new white Ford SUV.

He was taken to the Cincinnati Children’s Hospital, where he remains in care of state officials.

Sergeant Bill Rowley, from Aurora Police Department, say they are aware of the reports about the boy claiming to be Timmothy, and are currently working to verify his claims. Sgt Rowley said:

‘We have no idea if this is Timmothy Pitzen. We don’t know if it’s a hoax. Obviously, everyone’s hopeful, but we have to be super judicious.’

And Timmothy’s grandfather Alana Anderson said she was ‘praying’ that the boy’s identity would end up checking out.

After being dropped off at school by his father, Timmothy was picked up that evening by his mother, Amy Fry-Pitzen, 43.

She took Timmothy on a three day vacation, including trips to the zoo and several water parks, before checking into a motel and killing herself.

A note found afterwards claimed the then six year-old was safe in the care of others, and added ‘You’ll never find him.’

After being taken to police, the boy claiming to be Timmothy gave a description of his alleged kidnappers.

"You Were Not A Vice President When MoMo Was Introduced 11ye...
33 minutes ago