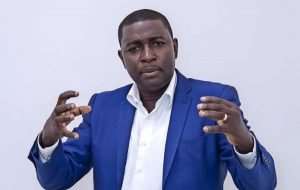 An Accra Circuit Court has granted Salifu Maase a.k.a Mugabe Maase, a presenter at an Accra Based Radio XYZ bail in the sum of GHc50,000.00 with three sureties.

The accused was charged with offensive conduct to breach public peace and publication of false information that could cause fear and panic.

Godwin Tamakloe, Counsel for Maase told the court his client was ready to stand trial.

He said the charges against his client were misdemeanours adding that the accused had people of substance to stand surety for him and therefore prayed the court for bail.

Deputy Superintendent of Police, George Amegah told the court the prosecution was not opposed to the bail application but pleaded with the court to make sure the bail conditions would make the accused person to appear before the court for a speedy trial.

The Court presided over by Mrs Eva Bannerman Williams then granted Mugabe the bail after listening to both sides.

The case has been adjourned to May 2, for commencement of the trial.

Mr. Maase is alleged to have said on his programme on Radio XYZ that he had credible information regarding a threat on the life of Mr. Manasseh Awuni, whose documentary on some alleged militia group training at the former seat of government, Osu Castle, dominated major conversations in the country.

The government said the documentary was misleading and denied sponsoring the group.

The Minister of State in charge of National Security, Byran Acheampong said the activities of the group, known as De Eye, at the Osu Castle were halted in October 2018.

The reports of death threats followed the killing of Ahmed Hussein-Suale, an investigative journalist with the Anas Aremeyaw Anas-run Tiger Eye PI.

Mr. Hussein-Suale was shot dead near his family home in Madina on January 16.

It is believed that his killing was connected to the role he played in the investigation of corruption in Ghana football in 2018.

—GNA with additional files from citinewsroom.com