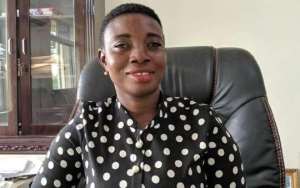 A court injunction, secured at the eleventh-hour, has saved Mary Boatemaa Marfo, the DCE for Sekyere East District in the Ashanti Region.

Some aggrieved assembly members in the district had threatened to pass a vote of no confidence against the beleaguered DCE on Tuesday.

However, they were stopped in their tracks when one Denis Asenso, also an assemblyman in the district, secured a last-minute court injunction.

The group of assemblymen, who were eager to impeach the Sekyere East DCE, had no option than to leave the venue in disappointment.

Later on, another group of NPP members stormed the NPP office at Effiduase on Tuesday afternoon to cause 'commotion.'

The angry-looking NPP members alleged that some NPP party executives were behind the plot to impeach the DCE.

Their 'invasion' of the party office resulted in violence as they openly traded hefty punches with some NPP executives.

Sources said that four persons, said to be NPP members, were arrested by the police for storming the NPP office to cause violence.

"You Were Not A Vice President When MoMo Was Introduced 11ye...
16 minutes ago