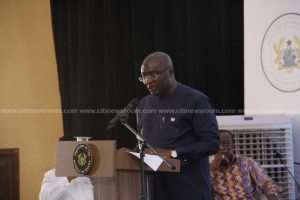 The Vice President, Dr. Mahamudu Bawumia has lamented the inability of the Ghana Grid Company Limited (GRIDCo) to operate at optimum level without plunging the country into total darkness.

It says the company is struggling with transmission challenges as a result of obsolete distribution equipment.

Explaining the recent power cuts at a town hall meeting on Wednesday, Dr. Bawumia insisted that Ghana is producing enough power but GRIDCO, the power distribution company, is unable to distribute it due to its old systems.

“Even though we don't have problems with power generation capacity, we have some problems with the transmission. The GRIDCO network is old and it has been unable to invest in high capacity lines because of financial difficulties.”

Dr. Bawumia also disclosed that the country is currently paying an amount of $24 million per month for unused power under the agreement with the Independent Power Producers.

He said there are fears that amount may double this year.

“The energy sector is key for industrialization. We inherited many challenges in the sector but they are being addressed. Ghana has excess capacity in energy generation but the contracts entered into for many of these IPPs are expensive and financially burdensome. Most of these contracts are ‘take or pay’ arrangements. This means that even if we don't need the power, we still have to pay for it. Ghana is currently paying $24 million a month in excess capacity charges alone for power we have not used. This will increase to about $41 million a month later this year, with the coming onstream of CEN Power, Early Power and Amandi power plants.”

Amewu apologizes to Ghanaians over blackouts

The Energy Minister, John Peter Amewu, has apologized to Ghanaians for the recent blackouts in parts of the country.

Although the Minister will not admit that the outages indicate the return of the most dreaded 'dumsor', he said plans are far advanced to resolve the energy challenges facing the country.

Mr. Amewu assured the citizenry of relief soon saying the power situation will be normalized within the shortest possible period.

“First of all, we want to apologize to Ghanaians for this intermittent supply. We are never back to the era of the consistent and persistent shortfall in supply. We are in an era where we have installed capacity available but what we have to do is to change that installed capacity into availability. We are learning from our experience so Ghanaians, we are sorry. This short period is just intermittent. I promise you that from 12th April, you will continue to enjoy sustainable use of your power.”

The Energy Ministry insisted that the recent challenges have nothing to do with financial problems or mismanagement.

The Minority has stated that the government has returned the country to an era of load-shedding popularly called “Dumsor”, a claim the Energy Minister has dismissed.

Amewu has promised that the government has put the necessary measures in place to resolve the problem within 12 days.

In light of the recent challenges, the Africa Centre for Energy Policy (ACEP) has asked the government to publish a load shedding time-table for the country.

According to ACEP's analysis, the current power situation resembles the onset of the power crisis which bedevilled the country some four years ago.

The Ghana Gas Company had assured that the power supply will be stabilised within the next two weeks.