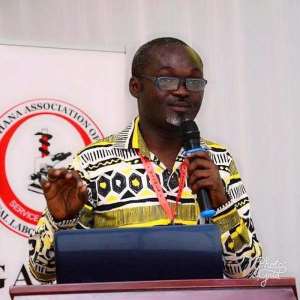 The District Chief Executive for the Akatsi North District, Dr. Prince Sodoke Amuzu has added his voice to the call on government to lift the ban on the use of motor cycles for commercial purposes.

The DCE made the call during a sod-cutting ceremony at Agormor on Wednesday, noting that the trade is not only a source of livelihood to his people but remains the only convenient and available means of transportation within his district, where taxis do not operate.

"The 2012 ban is simply detrimental to those of us leaving in the rural areas. In our communities, we don't have trains, taxis nor trotros plying our roads. How do we commute to places to do our stuffs if the only available and convenient means of transportation is banned and the law being enforced?"

"Many of our youths depend on this business for livelihood. So, therefore, it's again a bad law regardless. It is my wish that this ban is lifted, then we regulate their activities and give them the needed training so that they can remain in business and provide us with their services".

According to the DCE, anything other than the regularisation would not be accepted by he and his people in the Akatsi North District.

In 2012, the use of motorbikes for commercial transport in the country was outlawed under Regulation 128 (1 – 4) of the Road Traffic Regulations which states that: "The licensing authority shall not register a motorcycle to carry a fare-paying passenger."

Parliament has since last week been engaged in a deadlock over the call for a reversal of the law, which many say is no longer relevant to securing a livelihood for the teaming unemployed youth.

Some other people insist, however, on the enforcement of the law, since the use of motorcycles for commercial transport, is said to be the highest contributor to the high incidence of road accidents.