Can We Arrest The Surge In Mental Health Patients On Our Streets? 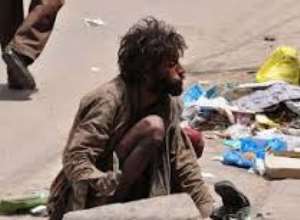 The streets of Accra have gradually become breeding grounds and a hub for mentally challenged patients.

As part of the situation analysis report of WHO, there is a treatment gap of 98% of the total population expected to have a mental disorder.

Doctors and nurses upon several complaints and appeals to government are now helpless due to the lack of support hence their decision to leave patients to the mercy of the streets. These patients now dwell under bridges and overpass across the country mostly in the capital city.

While chronicling this piece, I recount how my course mate Ferdinard Tiekon had to run and quickly cross the Highway at Ako Adjei overpass near the CID headquarters in Accra for his safety after he was chased for no provocation by one mentally challenged woman wielding a metal.

Other colleagues’ narrated similar incidents with how their inability to give a coin to some deranged persons on different occasions have resulted in anger leading to verbal assault and a chase.

I've also recounted how a young lady was rescued from a young mentally challenged man who held her for no reason but to demand immediate sexual intercourse.

Many may have several encounters to share as far as their daily meetings with mentally challenged persons are concerned.

One question that I asked Ferdinard when he narrated his ordeal was: What if there was an oncoming vehicle that knocked you down while you were unknowingly crossing the road for safety.

His answer was: "Is there a court that can prosecute a deranged person? Absolutely No, that means I will be jumping from frying pan to fire".

Ferdinand and other friends may have been lucky to escape that day but who knows what awaits that young girl or that young boy in the lower or upper primary school?

How can they be smart to escape unhurt should they encounter similar situations?

Aside the threats these deranged persons pose, there are other issues to solve as well with the needed urgency and support.

It is important to state that right after Adam’s generation, humans have learnt the need to wear clothes. Since then, generations have appreciated the importance of clothes beyond beautification.

My worry always is about the age group involved and how they end up showcasing their private parts to the whole world on the streets. Sensitive parts especially genitals, as created by God, were meant to be hidden. That's why it was placed beneath in God’s wisdom.

Routinely, we are exposed to different sizes and shapes of genitals of these deranged people on the streets.

This should be a disgrace to humanity and people of Ghana because there is no difference in what they showcase and what others cover. The sizes might vary from person to person but it's similar entity.

Though many will argue that it's their own body parts, it's important to also know that Accra is the capital city of Ghana and as well centre to the world, and as such we are regularly visited by diplomats every now and then.

It is not to say that I am undermining people with mental illness but we must take a critical look at how rampant deranged persons are flooding the streets. As a center to the world, we must set a good record.

I've also wondered how young men and women of ages between 20 to 40 years have ended up on the streets virtually unclothed.

Though many aren't perturbed about the increase, we should rather be worried as a nation because the country is gradually losing its youthful labor force to mental illness.

In 2018, The deputy director of Christian Health Association of Ghana (CHAG) , Dr James Duah as quoted on myjoyonline.com described mental illness as a condition that affects person’s thinking, feeling and mood and it is caused by genetics, environment, lifestyle, traumatic, drugs and alcohol abuse among other practices.

Experts say everyone is at risk of getting mental health illness irrespective of one's profession and social status.

According to Dr Duah, impaired ability to relate to others, inability to cope with the normal stress of life, inability to function and poor performance, are some early signs of mental illness with delusions, echolalia, suicidal tendencies, extreme quietness, isolation, dressing and getting on the streets as some late causes.

Other psychiatric doctors have mentioned unemployment, divorce and substance abuse as some other major causes of mental problems in Ghana.

The alarming figures should raise an eyebrow and call for concerted effort to arrest the canker.

While government of Ghana is proud to have secured 3 billion dollar Eurobond with 2 billion allocated for infrastructure in March 2019, resourcing mental health care units and facilities, procurement of drugs and recruitment of psychiatric doctors should be given the utmost priority.

Achieving the cleanest city in Africa is not only about seeing to an end of waste materials in Accra but also we must properly house these deranged persons with proper medical care and treatment at the various health care centers in the fulfilment of the Sustainable Development Goal 3 that seeks to promote mental health and well-being by 2030.

It was not surprising to know that about 41 percent of Ghanaians have some psychological disorder with 32.4 percent are believed to have mental disease, according to the 2018 report from the Ghana Health Service.

The above figures must ring bell and call on stakeholders to rethink in addressing this social canker.

Government and its agencies must consider recruiting psychologists and establishing dedicated departments for distressed people to seek counselling.

They must also establish nationwide psychological support centres in all the 16 regions to offer free services to unemployed youth.

It is also important that organizations, establish psychological department in their companies for advice and counselling.

Psychologists in Ghana must also wake up to work assiduously in establishing their own counselling units with low charges for the eradication of mental illness.

It is believed when these suggestions are implemented by October 10 2019, when Ghana is about to mark the international mental health day, we will have a street free of mental illness persons.