Let's Deal With All Chieftaincy/ Communal Conflicts Beginning With Fight Between Konkombas And Anofos. 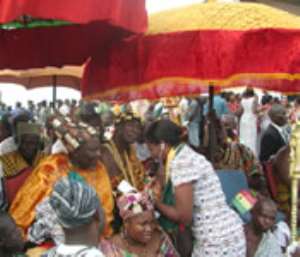 Most of us in Ghana were happy when the Andanis and Abudus smoked a peace pipe over the protracted DAGBON chieftaincy crisis leading to the enskinment of a new Yaa Naa after 17 years.

The Eminent Chiefs led by the Asantehene Otumfuo Osei Tutu II whose effort led to the solution of the chieftaincy conflict in Dagbon were commended in Ghana and worldwide for that feat. many people in and outside Ghana were happy with the high hopes that the feat chalked would lead to the solution to all chieftaincy conflicts in Ghana. However if the tit bits of news in the media constitute anything to go by then all is not well in some parts of Ghana especially around the remote parts of the northern region, particularly between konkombas and Anofos over a parcel of land. As a result of the age-old conflict between the two groups many homes were burnt with some people losing their lives..what is very disturbing is that the situation has affected some schools especially Chereponi snr. High School whose students contemplated leaving the school to go to their homes for the time being. This situation calls for a drastic action to nip in the bud this disturbing situation.. The fear is when conflicts persist it would affect economic activities including Agriculture and education.

Because of the conflict both chokisis and Konkombas fled from their homes to various towns in Ghana and neighboring Togo...this resulted in the police beefing security with with a curfew imposed..while the security arrangement led to peace in the area there's the need for the government to revisit a Workable means using chiefs, religious leaders an civil society to work for peace to prevail in the area.currently. The youth of Nantong in the Northern region have also used trunks, heavy stems and rocks to set up dozens of barricades on the dusty Tamale -Karaga – Gushegu road and using the blockade as checkpoints to obstruct motorists and road users, as part of their continuing protest challenging the decision of Dagbon overlord, Yaa-Naa Abukari Mahama II, to select Voo – Naa Mahamadu Bawa as new chief of the area. The situation is not dealt with yet.

Salifu Saeed northern regional minister has expressed shock at the conflict within chereponi and other areas of the north saying that the Waring fractions and those in chieftaincy dispute are closely related having inter married and belong to the same community. He expressed the belief that the conflict between the warring factions would end for them to live in peace ...Again Government can also resort to choosing eminent chiefs together With other groups to ensure lasting peace. When peace comes to the conflict area the government must continue by getting the eminent chiefs to work with the peace councils and religious bodies to move to all parts of the country to ensure lasting peace throughout Ghana.

"You Were Not A Vice President When MoMo Was Introduced 11ye...
24 minutes ago