How Scary Is The Chinese Belt And Road Initiative? 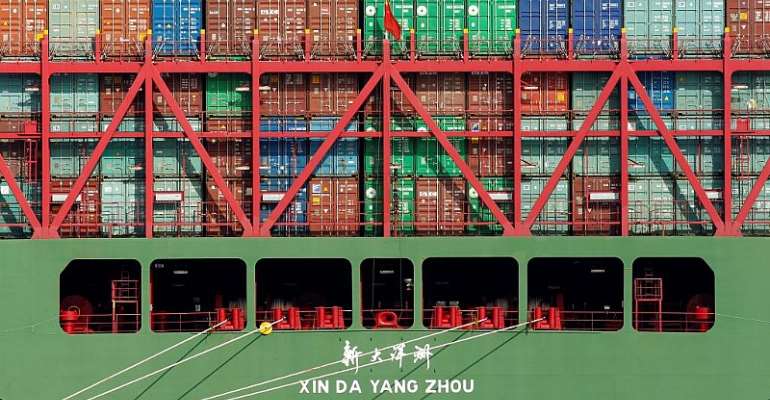 Next week, the Croatian capital Dubrovnik will host a meeting of the "16+1" group of central European countries and China, part of Beijing's trillion dollar "Belt and Road" trade and investment project. But is the project a benevolent Marshall Plan-style initiative to help needy states develop or a quasi-colonial scheme ultimately designed to keep the Chinese Communist Party in power?

The project was born in 2013 in Kazakhstan.

Xi Jinping, China's president, who was on a state visit to Astana, gave a lecture in which he proposed to create a “Silk Road Economic Belt,” in the spirit of the old trade route that crossed the Eurasian supercontinent 20 centuries ago.

To an audience of students who looked only mildly interested, Xi promised “win-win” outcomes in trade operations based on “mutual trust”. He promised that China would never intervene in the internal affairs of the participating countries nor seek leadership in regional affairs.

Today, the “One Belt, One Road” (Yidai, Yilu) project goes under the more investor-friendly name of the Belt and Road Initiative (BRI) and has 124 countries and 29 international organisations participating. The latest to sign preliminary agreements include G-7 member, Italy, and EU core member state Luxembourg.

Thousands of infrastructure projects are underway within the BRI framework, building on existing policies such as the “16+1 cooperation initiative” (between China and 16 central and eastern European countries) and Beijing's earlier Zouchuqu (“Going Out”) policy, which initiated overseas investments by Chinese companies.

Initially the “modern silk road” idea may have been no more than a guideline, but today it is well embedded in China's official politics. Formally, it is run by the National Development and Reform Commission (NDRC, headed by He Lifeng) the successor of the extremely powerful State Planning Commission that was responsible for hammering out China's economic Five Year Plans.

But the core of BRI decision-making is the shady “Small Leadership Group on the Construction Work of 'One Belt, One Road,” headed by Vice-Premier Han Zheng.

Han Zheng is also a member of the Politburo of the CCP's Central Committee, one of the seven most powerful men in China, having direct and daily access to Xi Jinping himself.

The group was formed on 30 March, 2015, two days after the development commission published an official policy document entitled “Vision and Actions on Jointly Building the Silk Road Economic Belt and the 21st-Century Maritime Silk Road.”

After that, BRI spread like wildfire along the “Bangladesh-India-Myanmar-China Corridor,” the flagship “China-Pakistan Economic Corridor” and others, with massive investments in ports from Pakistan's Gwadar all the way to the construction of China's first overseas naval base in Djibouti. Inland railroads, highways, bridges, and tunnels completed the network. In the process many existing facilities were taken over by the Chinese.

It is impossible to find a comprehensive list of BRI-related projects, their costs and the loans involved. The Beijing government-sponsored “Belt and Road Portal” provides a chaotic avalanche of information that seems to be designed to prevent any clear, overall view of this monster project.

In Europe, scattered information confirms that Chinese state-owned enterprises have major stakes in twelve European ports, including a controlling stake in Greece's Piraeus harbor – seen by Chinese media as the most important pillar of China's new Maritime Silk Road in Europe.

China has also made inroads into Europe's airport network, having acquired stakes in London's Heathrow (9.5 percent), Toulouse (49.99 percent), Frankfurt's Hahn Airport (82.5 percent) and full control over the main airports in Albania and Slovenia.

Investments in construction projects seem to follow a set pattern: Chinese state-owned or semi-private companies get involved in a project, often sidestepping the public procurement process. Then a Chinese financial powerhouse provides a soft loan, with low interest rates over a long period of time, and the work can begin. Construction workers and project management are often provided by China as well.

Xi Jinping and his BRI officials continue to stress that they are not trying to interfere in any nation's internal affairs, and that the often-heard reproach of “debt trap diplomacy” is a false accusation.

On 15 June, 2017, one year after China's takeover of the Piraeus container terminal, Greece blocked an EU statement critical of China's human rights record at the UN Human Rights Council, calling it “unconstructive criticism of China.” It marked the first occasion that the EU failed to make this yearly statement at the UN rights body. Earlier, Greece had blocked an EU condemnation of Chinese aggression in the South China Sea.

Both Greece and China deny that Beijing's economic leverage over Athens had anything to do with the Greek diplomatic stance, but others disagree. “Since the BRI investments, many of the targeted countries are becoming soft supporters of China in the international stage,” according to Philip Le Corre of the Carnegie Endowment for International Peace

Nice roads- but who pays?

In Montenegro, the China Road and Bridge Corporation is constructing the first phase of the Bar-Boljare highway – a spectacular stretch of road through mountains and valleys that require bridges on supports of over thirty meters high. The project is part of the pan-European Corridor XI, a ferry/motorway link between Bari in Italy and Romania's Bucharest via Montenegro's port of Bar and Serbia's Belgrade. It is one of the Belt and Road Initiative's crucial branches in Europe.

But according to a report by the International Monetary Fund, the project has sent Montenegro's debt soaring and has forced the government to raise taxes, partially freeze public sector wages and lower benefits for over 22.000 mothers.

In nearby Macedonia, a massive corruption scandal was exposed involving a former prime minister who was accused of asking China's Sinohydro Company for kickbacks mounting to 16 million euro. According to Marko Trushanovski, president of the Institute of Democracy in Skopje, it remains unclear if the Chinese paid, but they certainly got the project involving the construction of a 56 km stretch of the Kicevo-Ohrid highway without going through the normal process of public procurement.

A report by the European Institute for Security Studies adds that the Macedonian example is “indicative of the Chinese model of infrastructure investment in the Western Balkan region” where Chinese companies “have been awarded the contracts directly by the governments rather than through a competitive bidding process.”

And in Albania, where China Everbright Limited bought 100 percent of shares in Tirana International Airport, another Chinese company, Geo-Jade, was quick to take over Bankers Petroleum, a company involved in a 60 million euro tax dispute with the Albanian government. Bankers has the full rights to develop the Patos-Marinza oilfield, Europe's largest onshore oil reserve, and a 100 percent interest in the Kucova oilfield, Albania's second largest.

Meanwhile, the EU has become increasingly suspicious of China's moves into Europe. The “16+1” cooperation (an embryonic version of the BRI that dates back to 2012 and includes 11 EU and 5 Balkan countries) signed BRI-related preliminary agreements with Beijing without first consulting Brussels. Beijing's other investments and acquisitions have seen some European politicians accuse the Chinese of “buying up Europe”.

Most recently, French president Emmanuel Macron said that the EU needs “a unified strategy instead of individual national policies.

“The time of European naiveté is over," Macron told reporters in Brussels after a joint meeting of European leaders in March. But the remarks came just days before Italy signed its memorandum of understanding with China, becoming the first G-7 country to do so.

“I agree with President Macron's position, that we, democracies on the European continent, should stick together and guard our values and not allow non-democracies to expand their imperial schemes,” Veiko Spolitis, a former Lithuanian member of parliament who now works as a fellow for the Latvia Institute of International Relations in Riga told RFI.

But Brussels talks austerity, not soft loans for development projects, like China. “If we don't want to let China in, because it provides the soft loans, then Paris, Berlin, London, however Brexit turns out, have to get together and really strategically think about the further integration of the EU,” he says.

Chinese officials consequently play down these fears and, if Beijing had its way, no negative stories concerning the BRI would ever see the light of the day. Those reports that do emerge are rejected in a forceful and definite manner.

Because BRI is supported by a powerful propaganda tool.

According a recent report by Reporters Without Borders, “China's Pursuit of a New world Media Order,” Chinese state media, led by the official Xinhua News Agency, TV Broadcaster CGRN/CCTV and China Radio International formed the “Belt and Road News Alliance,” linking 72 media in 42 countries for the purpose of promoting BRI.

With You on the Silk Road

The effort led to a barrage of up-beat productions such as “Belt and Road: City Tour” on the Russian social network VKontakte, the documentary series “Revisiting the Silk Road” in Iran, a TV musical in Laos, and a series of TV video clips entitled “With You on the Silk Road” that is being broadcast in 10 Southeast Asian countries – repeating the official line of China's Communist Party.

It is not difficult for the Chinese propaganda machine to make inroads into overseas media. “We are in the middle of a transition between an ancient media model and a new model based on Internet,” says Cédric Alviani, the Taipei-based East Asia Bureau director of media watchdog Reporters Without Borders. And many media houses are cash strapped.

“For some media, the money brought by China to purchase editorial content, to buy advertising, to buy stakes in the media or even buy the whole company, might be seen as an opportunity.

“Also in countries with a high level of press freedom, people could not imagine that a new owner would pressure the journalists, put pressure on the editorial department, which is systematically the case with Chinese investments,” says Cédric Alviani.

“This media effort is part of a much bigger attempt by the CCP to achieve more influence and domination throughout the world. We can see it in trade, development and finance,” says Peter Humphrey, who worked as a consultant in China before being arrested and detained for thirty months on charges of spying.

He was tortured and shown on Chinese state-run tv giving a forced confession. Back in the UK, he filed a complaint against the British Broadcasting Regulator Ofcom against CCTV/CGTN because of their involvement in broadcasting forced confessions over the airwaves of the UK.”

Ofcom has not made a decision if it will block CCTV broadcasts or not.

Meanwhile, the Belt and Road steamroller ploughs on mercilessly without being bothered too much by criticism from NGOs and halfhearted opposition from EU leaders who at the same time don't want to endanger their relationship with China.

On April 11-13, new initiatives will be presented at the China and Central and Eastern Europe (CEE) summit in Dubrovnik, Croatia, which is another name for the “16+1” cooperation structure that was an embryonic form of the Belt and Road.

The CEE was dubbed a “Trojan Horse” by EU officials, and in 2017, then German Foreign Minister Sigmar Gabriel even said China should follow a “One Europe” policy – a jab at Beijing's diplomacy that demands any country that wants diplomatic ties with China to recognize “One China,” that means: including the rebellious province of Taiwan.

But it is almost certain that Greece will now participate as well, strengthening the “16+1” group (turning it into a more imposing "17+1") weakening Brussels's central leadership, and laying the groundwork for the second-ever Belt and Road forum to be held in Beijing on 26 April.