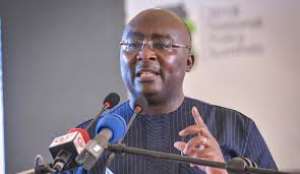 Vice President, Dr. Mahamudu Bawumia has indicated that some inconsistency in the timing of some actions of the International Monetary Fund (IMF) at the latter stages of Ghana’s exit is largely to blame for the Cedi fall.

The government has been on the receiving end of severe backlash and criticism in the past couple of months following a bad performance of the Cedi against the major trading currencies on the stock market. Having become extremely powerless against the Dollar, business owners in the country had no other option than to fume at the government to do something about the situation.

Speaking at an Economic Management Team town hall meeting at the College of Physicians and Surgeons in Accra on Wednesday, 4 April 2019, Dr. Bawumia revealed that the shocking fall of the cedi was largely as a result of an inconsistency in the timing of seven prior actions of the International Monetary Fund on reserves target.

“The most important and the proximate cause of the recent depreciation of the cedi is the time inconsistency of the IMF prior action on the reserves target”.

“At the end of January, as part of the seven prior actions to get to the IMF board and the completion of the IMF programme, the IMF gave Ghana seven actions to complete before March 15. One of the conditions that the Bank of Ghana had to meet was to increase its net international reserves to the level of December 2018.

“To increase the net international reserves, however, meant that the Bank of Ghana could not sell any foreign exchange in the market; they had to essentially hold their hands to the back and could not intervene on the market during this particular period. So, the demand for foreign currency was not met by supply as normally happens on a day-to-day basis and we all know when the demand is greater than supply the price will go up”, the Vice President explained.

Meanwhile, the Cedi is gradually picking up and is now performing a lot better against the major trading currencies, especially the dollar.

"You Were Not A Vice President When MoMo Was Introduced 11ye...
26 minutes ago