What Next For Algeria, As President Boutflika Resigns? 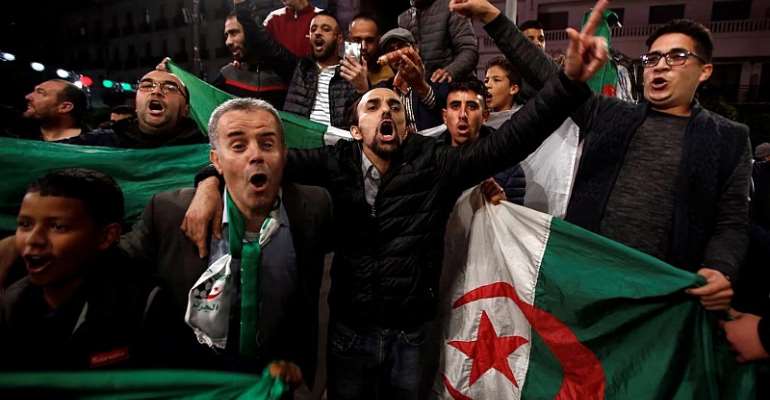 Algeria is facing a new era in the wake of the resignation of President Abdelaziz Bouteflika. Questions abound as to what happens next for this resource-rich nation and Western ally in the fight against terrorism.

Algeria's 12-member Constitutional Council is expected to meet this Wednesday to confirm the departure of President Bouteflika. The ailing leader submitted his resignation with immediate effect yesterday, ceding power in the face of widespread street protests after two decades at the helm.

Algeria's Constitution says that when a president dies or resigns, the Constitutional Council confirms the leader's absence and both houses of parliament convene. The president of the upper house is named as interim leader for 90 days while a presidential election is organized.

However the protesters who drove Bouteflika out want a drastic change of Algeria's political elite, seen as corrupt and secretive.

Celeberations on the streets

Following Tuesday's announcement, car horns sounded on the streets of Algiers before crowds of flag-waving people emerged from their homes and converged in the centre of the Algerian capital to celebrate.

State news agency APS quoted Bouteflika's resignation letter as saying. "I have the honour to formally notify you of my decision to terminate my term of office as President of the Republic from today, Tuesday."

The letter continued, "this decision, which I take in my soul and conscience, is destined to contribute to the appeasement of the hearts and minds of my compatriots, to allow them to take Algeria towards a better future to which they legitimately aspire."

Pressure from the people

Long accused of clinging to power, the leader who came to office in 1999 had faced mounting pressure to step down after his decision to seek a fifth term despite rarely being seen in public since suffering a stroke in 2013.

The 82-year-old said last month he would pull out of the bid for another term, and on Monday his office said he would resign before his mandate expires at the end of the month.

The moves failed to satisfy protesters who feared a ploy to extend his rule and the armed forces chief called for Bouteflika to step down.

Reaction from Paris and Washington

French Foreign Minister Jean-Yves Le Drian said Bouteflika's decision to step down marked the turning of "an important page in the history of Algeria".

In a statement, Le Drian added "we are confident in the ability of all Algerians to continue this democratic transition in the same spirit of calm and responsibility" that has prevailed in recent weeks.

Meanwhile, the United States' State Department has said the future of Algeria is now up to its people.

Spokesman Robert Palladino told reporters that questions about how to navigate the transition are for the Algerian people to decide.

As rumours circulate of behind-the-scenes manoeuvring, Algerian prosecutors announced earlier this week that they had banned corruption suspects from leaving the country after launching investigations into unnamed individuals.

The authorities did not say who was being targeted by probes into fraud and illegal money transfers abroad, but they followed the arrest of the president's key backer, businessman tycoon Ali Haddad.

Haddad, described by Forbes magazine as one of Algeria's wealthiest entrepreneurs, was detained at the weekend at a border post with neighbouring Tunisia.

Bouteflika had named a new government on Sunday, made up mainly of technocrats under recently appointed premier Noureddine Bedoui.

The administration -- supposed to steer the country towards transition -- included General Gaid Salah remaining in his position as deputy defence minister.