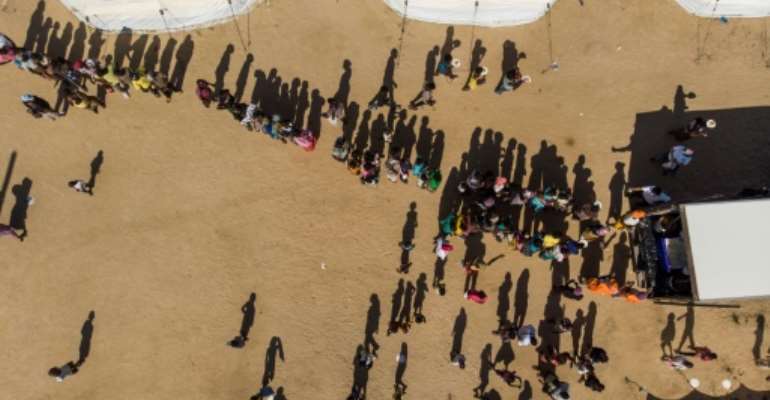 ealth authorities said 376 new cholera cases had been reported Tuesday taking the total number of people infected to 1,428 -- most of them in Beira -- since the first cases were reported last week. By Guillem Sartorio (AFP)

A cyclone-induced cholera outbreak in central Mozambique has killed two people and infected more than 1,400, the government announced Tuesday on the eve of the launch of a mass vaccination drive.

Health authorities said 376 new cholera cases had been reported Tuesday, taking the total number of people infected to 1,428 since the first cases were reported last week.

The bulk of the cases have been registered in the central city of Beira, which has so far recorded 1,218 cases.

Cholera is transmitted through contaminated drinking water or food and causes acute diarrhoea.

The aid-dependent impoverished country on Tuesday took delivery of 900,000 doses of oral cholera vaccines ahead of the roll out on Wednesday of the lifesaving inoculations to avert an epidemic, more than two weeks after the devastating cyclone hit and caused heavy flooding.

The vaccines were sourced from a global stockpile for emergency in India, according to the UN.

"The procurement of vaccines is one of several approaches UNICEF and its partners are taking to curb the spread of cholera," the UN children's fund UNICEF representative Michel Le Pechoux said in a statement.

Water treatment systems are also being re-established while water purification products are being distributed across the affected region.

Cyclone Idai smashed into the coast of central Mozambique on March 15, unleashing hurricane-force winds and rains that flooded the hinterland and drenched eastern Zimbabwe.

By Tuesday 598 people had been confirmed killed by the cyclone in Mozambique alone while Zimbabwe government reported its toll to have climbed to 268 -- taking the toll to 866 between the two countries.

Hundreds of thousands of other people have been left homeless, with many of them forced into overcrowded shelters or not having access to clean drinking water and proper sanitary facilities.