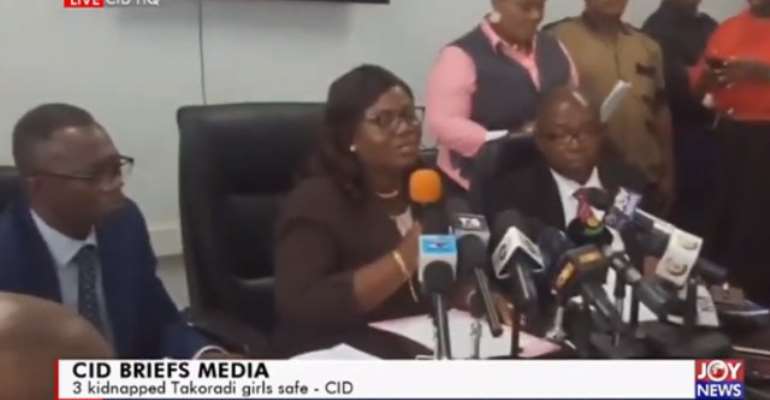 A two-man Nigerian gang have been busted and have confessed to at least 11 armed robberies, a spree that included raping their victims before bolting with the cash worth more than one million cedis.

The two, 34-year old Daniel Ackan and another called Faith, were arrested on March 9 2019, the Criminal Investigations Department of the Ghana Police Service has revealed.

At a press conference addressed by its Director-General DCOP Maame Yaa Tiwaa Addo-Danquah recounted the night life of the gang in 11 horrifying episodes over the past 12 months.

She began with the armed robbery of 10 British nationals who has arrived in Ghana on December 7, 2018 to do charitable work.

But at Kokrobite on December 8, 2018, three robbers attacked them at their residence, leaving them lying face down as they stole 11 mobile phones, mini Ipads, wedding rings, £180 and collected their ATM cards.

They also stole 940,000cedis and bolted. But not before raping, at gun point, six ladies were raped including five British national who were part of the team of volunteers.

A Ghanaian, 34-year old driver, known as Nana Israel Damascus was part of the gang and was arrested at Kasoa in the Central region.

Since their arrest, the CID says, it has heard 10 more confessions.

June 9, 2018: 2am: Suspects unlawfully entered a business premises at East Legon in Accra and stole jewellery worth $40,000 and also stole $10,000 cash. This was done with pointing a gun to the businessman.

February 21 2019, At 12:30AM: Gang attacked home at Westland where a man and his wife were robbed of monies and personal effects and in turns raped a young lady in the house.

February 25, 2019: Gang unlawfully gained entry into a house near Amasaman where a man lived with his family. All robbers had pistols. They stole five Samsung phones, three silver watches, gold rings, three gold watches, ¢ 600 cedis. One of them dragged an 18 year old daughter into a guest room and raped her at gun point.

February 26, 2019: 2AM. Gang awoke a victim’s family and ordered a family to lie down and tied them up with bedsheets and “ransacked the entire house”. They stole ¢ 18,000, wedding rings and complainant’s passport. They also took the ignition key to Hyundai Tucson.

Converting the value of currencies and jewellery stolen, the gang within 12 months bagged 2,63m cedis.