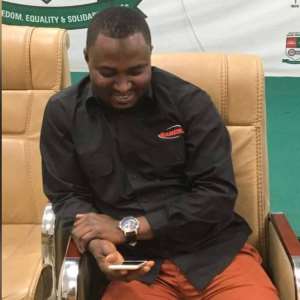 His comment comes after the NPP's Communicator, Abronye DC has alleged that the former President John Mahama has rented an apartment for the former HIV/AIDS Ambassador, Joyce Dzidzor Mensah in Germany to escape arrest in Ghana.

The NDC Deputy Youth Organizer has said that the embattled Abronye is only seeking the attention of his Party delegates ahead of their upcoming Regional Conference in May and needed to deploy this infantile attacks on the person of the former President, HE John Dramani Mahama to gain the sympathy of his delegates in their election.

''Abronye cannot continue to have an open 'diarrhoea' at his age, especially in our politics - a condition that cast slur on politicians and Ghanaians at large, he chastised.

He added that he sees Abronye's consistent fulminating of Mr. Mahama as a decoy to achieve cheap fame and therefore described his move as a 'forlorn attempt'.

The Deputy Youth Organizer puzzled why Abronye, who stated on 8th August 2018 of quitting the NPP as a result of unfair, neglect, grievous and vicious treatment, shamefully spew attacks if not in an attempt to get his protuberant stomach filled; he excoriated and jabbed in an interview.

He, therefore passionately, appealed to the Office of the former President not to give attention to this ''barking being'' who has been rejected by his own Party but continuously seek to ride on the fame of former President Mahama to remain relevant through his barking prowess going into their delegates' election.

He avowed to personally chain Abronye from his infantile and baseless incessant attacks on the integrity of former President John Mahama if he, Abronye is not chained by the NPP.

He ended by pledging his support to foot the hospital bill if Abronye's 'diarrhoea' requires a mental surgery.