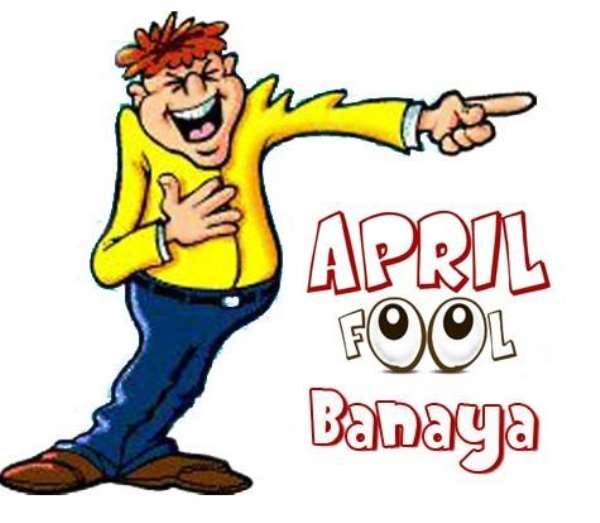 Sonia, who is an architect, was so elated when she had a call from her friend that her professional exam which was to hold on Saturday, 1st day of April, 2017 was postponed in a week time.

Unfortunately for her, the euphoria that ensued from the said “postponement” terminated abruptly by a later call she received from one of her tutors three hours after she had the earlier call of the purported postponement.

Sonia was made to understand that the exams she was informed by her friend to have been postponed started ten minutes before the latter call came in, and that she will not be let in if she is thirty-five minutes late for the examination.

It was indeed an unpleasant moment for Sonia when she realised that what her friend did to her was APRIL FOOL. She became so enraged and restless.

Already distracted and disorganised as she was, Sonia hurriedly leave the house but unluckily fell on the staircase and sustain serious body injuries and also missed her professional examination. She was so angry at her friend for such a mischievous and expensive joke.

While Sonia’s parent blamed her for being so naïve to have believed the information the way it came, not taking independent steps to ascertain the veracity or otherwise of the information she received knowing fully well that 1st of April is always “April Fool”. Sonia had after recovering, concluded in her plans to maintain legal action against her friend for such grave harm caused.

Though we agree with the fact that Sonia acted recklessly without prudence, we should however not become oblivious as to “whether or not the prevailing and permeating concept of ‘April Fool’ would exonerate Sonia’s friend from the liability she incurred by her deception and misrepresentation”.

In resolving this legal conundrum, reference has been made to the old English case of Wilkinson V Downton (1897) 2QB 57, which gave birth to developments of this kind. A succinct look into the fact of the case and the opinion of the court will suffice in buttressing our opinion.

Thomas Wilkinson was the landlord of the Albion public house in Limehouse. A regular customer of the public house named Downton decided to play a practical joke on Wilkinson's wife. When Mr. Wilkinson went to see the races in Harlow, he left his wife to manage the house.

Mr Downton approached Mrs Wilkinson and told her, falsely, that her husband had been seriously injured in an accident. Mr Downton told Mrs Wilkinson that he had suffered two broken legs and that he was lying at The Elms in Leytonstone. He told her that she should go to him in a cab and bring two pillows to carry him home.

The effect of Mr. Downton's false statement to Mrs. Wilkinson was a violent shock to her nervous system, causing her to vomit and for her hair to turn white and other more serious and permanent physical consequences which at one time threatened her reason, and entailing weeks of suffering and incapacity to her as well as expense to her husband for medical treatment.

These consequences were not in any way the result of a history of bad health or weakness of constitution; nor was there any evidence of predisposition to nervous shock or any other idiosyncrasy therefrom Mrs Wilkinson sued on an action on the case.

Mr Justice Wright held that Mrs Wilkinson had a valid claim for the intentional infliction of mental shock, and awarded her £100. Mrs Wilkinson was entitled to a small claim for the cost of railway fares of persons sent by the plaintiff to Leytonstone in obedience to the false statement.

Justice Wright gave two requirements for an action in nervous shock, basing it on the physical harm that flowed from the shock. The defendant (the person telling the lie) has to have wilfully done an act "calculated to cause physical harm to the plaintiff.

In the instance case, if Sonia can lead credible evidence to prove her case that the friend acted with intent to cause her pains and frustrations, making her missed the professional examination, the court in discharging its duties will certainly be bound to grant her reliefs in accordance with the merit of her case.

In setting the above principle in motion in our current Nigerian legal system, the principle in Wilkinson’s case has been discreetly followed in plethora of cases as deem fit depending on the circumstances and peculiar nature of each case.

It must also be borne in mind that the prevailing concept of ubi jus ibi remedium (where there is a right, there is a remedy) in our legal system has given birth to legal actions where remedies were claimed as results of injuries suffered from both physical and mental pains.

Apparently, it is reasonable to deduce and hold from the above that a legal action can arise and be sustained from any deception, misrepresentation and misinformation emanating with the intent to cause harm and mischief in the name of “April Fool”.

More so, hiding under the canopy of April fool to publish defamatory statements, which injures the reputation of a person, lowering his standard in the eyes of the right thinking members of the society does not exonerate the writer from his liability that follows.

In a nutshell, let this “April Fool” not become a hiding point to perpetuate illegalities, causing grievous bodily harm, emotional and mental trauma to our fellow citizens. If we do, then justice must be done and heaven will not fall.

While we are not against the humor that comes with April Fool, it should not be used at the detriment of others and or creating unnecessary but high expectations that comes with hypertension.

A word is enough for the wise. Thank you.
Edikan Ekanem is an Abuja based Legal Practitioner, a Contemporary Writer and a Columnist. He can be reached @ [email protected]