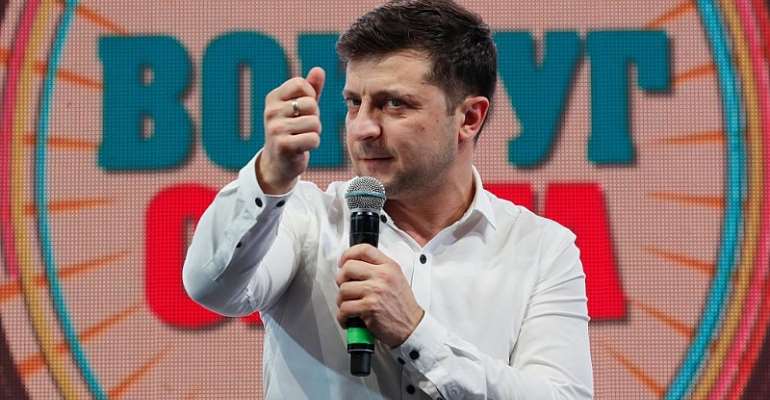 Comedian Volodymyr Zelensky looks favourite to become Ukraine's president after first round results on Monday showed him taking nearly twice the number of votes as his nearest rival, incumbent Petro Poroshenko, despite concerns about his vague platform.

Many initially dismissed Zelensky's candidacy as a joke, but the 41-year-old showed that it was anything but in Sunday's vote.

His political experience had been limited to playing the president in a TV show but he leapfrogged establishment candidates amid public frustration over corruption and a stalling economy.

But now he is to go up against the real President in the 21 April run-off.

If Zelensky wins the leadership, as polls and analysts suggest, he will take the reins of one of the poorest countries in Europe – a nation of 45 million people fighting Russian-backed separatists in its industrial east.

"I want to thank all the Ukrainians who came out and voted in seriousness," the high-spirited actor told supporters after exit polls showed a better-than-expected result late Sunday.

Zelensky had topped opinion polls for weeks and the main question going into the weekend vote was who between Tymoshenko and Poroshenko would meet him in the second round.

But the size of his lead came as a surprise.

Poroshenko said the result was a "harsh lesson" for him personally and for authorities as a whole.

Ex-prime minister Yulia Tymoshenko, who came to international prominence as a face of the 2004 Orange Revolution, came in third in her third tilt at the presidency.

She said the exit polls were "dishonest" and asked supporters to wait for final results.

The central election commission said there had been no major violations during the vote, though the interior ministry said it had received hundreds of reports of irregularities.

Political analyst Anatoliy Oktysyuk of Kiev's Democracy House think tank said it would be "difficult" for Poroshenko to knock the actor off course in the head-to-head round.

"Poroshenko has no room for growth. He has played all his cards," Oktysyuk told AFP.

"This is a protest against the old elites and a call for new faces."

Oktysyuk suggested Poroshenko would try to frame the contest as part of a wider confrontation between Moscow and the West – presenting himself as the only candidate who could stand up to Russia's Vladimir Putin.

Other commentators said it was too early to predict the result of the second round despite the comedian's commanding lead.