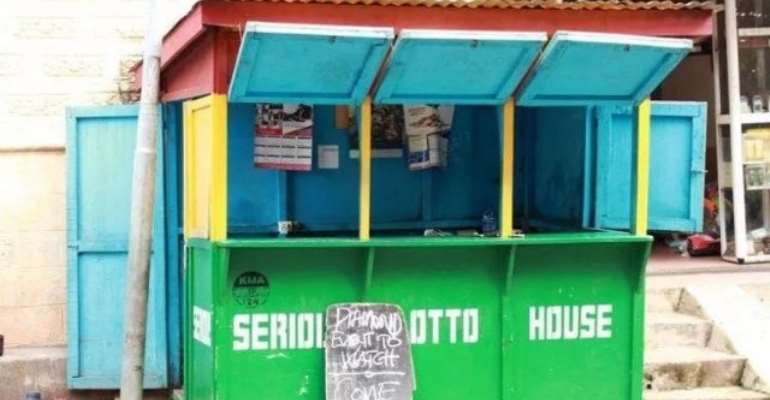 The National Lotto Authority (NLA) say the lotto fraudsters largely supported by some illegal Lotto Operators and Agents have consistently been misinforming the general public that:

1. They have access to NLA Winning Lotto Numbers before Draw.

2. Patrons should not stake NLA products because NLA will automatically know the numbers they have staked on the Machines (Point of Sale Terminals, POSTs), hence, the Authority will ensure that such Numbers are not drawn. All these information are completely false.

It has also come to the attention of the Authority that Alpha Lotto is using Machines (Point of Sales Terminals, POSTs), charging commission above the Commission of NLA.

The Authority would like to state categorically that, the National Lottery Authority (NLA) has NOT Licensed and authorized Alpha Lotto to use its own Machines (Point of Sale Terminals, POSTs) and Platform to generate branded electronic tickets.

Alpha Lotto Point of Sale Terminals (POSTs) are illegal and steps are being taken by NLA to cease all the Machines of Alpha Lotto with immediate effect.

Caution to the public

The National Lottery Authority would like to use this opportunity to inform the general public that:

1. NLA has NOT authorized nor appointed any individual or group of individuals to offer Winning Lotto Numbers to the Public, since lotto is a game of chance and it is impossible to foretell winning numbers.

2. NLA and its Staff have no knowledge and control over the outcome of Draws. Draws are conducted in a very open and transparent manner, and open to the general public. Every Ghanaian is free and welcome to witness and partake in the Draw at 6:30pm daily except Sundays and public holidays.

3. It is absolutely false that Staff of NLA, the Lotto fraudsters and social media miscreants have access to the Winning Lotto Numbers of the Authority.

4. The social media pages created by the lotto fraudsters and social media miscreants using pictures and names of the Director-General and Staff of the Authority are completely fraudulent and intended to defraud unsuspecting and gullible Ghanaians.

5. The products of the Authority are sold by Licensed Retailers (Lotto Marketing Companies) using Point of Sale Terminals (POSTs) approved by NLA to generate branded serialized electronic tickets as a proof of transaction to be used to redeem prizes if anyone wins after the draw.

6. NLA has neither Licensed nor authorized Alpha Lotto and any Private Lotto Operator or Agent to use Machines (Point of Sale Terminals, POSTs) to generate branded electronic tickets parallel to NLA serialized electronic tickets. Steps are being taken by Management of NLA to cease all the Machines of Alpha Lotto and any other Private Lotto Operator or Agent.

9. The Authority shall not be responsible for any losses incurred by unsuspecting people who are defrauded by these lotto fraudsters, social media miscreants and illegal lotto operators and agents.

However, the Authority says in collaboration with the relevant Security Agencies, it is taking pragmatic steps to help curtail the activities of the lotto fraudsters, social media miscreants and illegal lotto operators and agents.

Finally, the NLA “respectfully would like to passionately appeal to the general public to be more vigilant and discontinue engaging the services of the lotto fraudsters, social media miscreants and illegal lotto operators and agents.”

Documents Suggests Undervaluing Of Airport Company Assets To...
32 minutes ago