Albinism In Africa: The Struggle For Survival 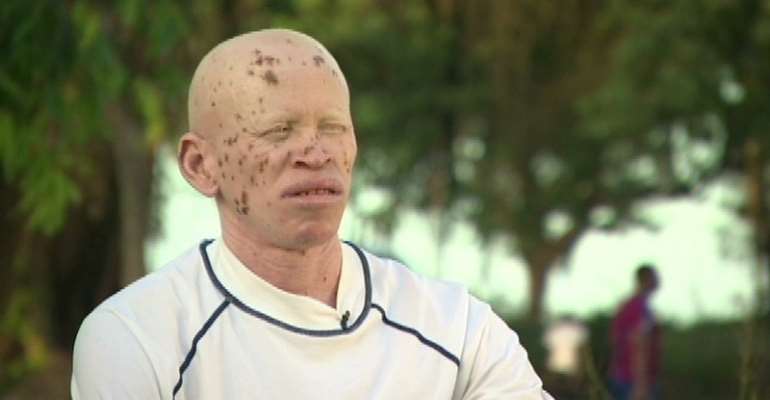 Albinism is an inherited condition caused by the absence of melanin production in one’s body. According to Mayo Clinic, a not-for-profit organisation, “the type and amount of melanin your body produces determine the colour of your skin, hair and eyes”. Melanin plays different roles on a human body; from protecting the skin from the sun’s ultraviolet (UV) rays to the development of optic nerves.

One of the greatest challenges facing persons with albinism in sub-Saharan Africa and across the globe is the threat from the sun, which affects their skin and eyes. Due to the lack of melanin production on their skins, their constant exposure to the sun without protective clothing makes them highly vulnerable to skin cancer, which advocacy groups have referred to as a “silent killer”. It also leads to visual impairment.

The United Nations online magazine, AfricaRenewal, states that, “without the right treatment, up to 90% of albinos die before the age of 40 in sub-Saharan Africa”. This comes as no surprise as the World Bank’s 2018 Poverty and Shared Prosperity report, estimates that 413 million people in the region currently live in extreme poverty (earning less than $1.90). This is more than half of the world’s total.

This puts the affordability of the required sunscreens and protective clothing needed by persons with albinism beyond the means of most of them, as they fall within the category. For example, in Ghana where about 25% of the population earn less than $1.90 per day, a bottle of Max Block Sunscreen 118ml which lasts less than a week, costs GHS 60 ($11).

Already faced with the common and natural threats from the sun, persons with albinism in sub-Saharan Africa are also threatened by other human-related factors. A UN human rights expert, Ikponwosa Ero, described their plights as, “an endangered group of people facing a risk of systemic extinction over time if nothing is done.”

In some parts of the continent, being an albino is often a death sentence as several hundreds of them have been brutally murdered and maimed for their body parts. Their body parts are believed to bring good luck and wealth when used to make magic potions by witch doctors, and they could fetch as much as $75,000.

In Malawi for instance, the Crux, an independent Catholic news website, reported that at least 26 persons with albinism were murdered between 2013 and 2018, with 5 recorded in 2018, including one on December 31, 2018. Also, on February 15, 2019, a 14-year old boy with albinism, identified as Goodson Makanjira, was found dead with his body parts missing, after being reported abducted two days earlier, in the Dedza District in Malawi.

While some African governments have made efforts at protecting persons with albinism in their countries, others are accused of not doing much to protect them. For example, an Amnesty International report in June 2016, accused the Malawian government for failing to protect albinos, leaving them at the mercy of criminal gangs who hunt them for their body parts. The government rejected the report claiming it as “unfair”. In neighboring Tanzania, the government has established centers like the Kabanga Protectorate Center and Buhangija Albino Center, where persons with the condition are housed and offered education.

Another challenge faced by persons with albinism is the false belief of they curing AIDS when an AIDS-infected person sleeps with them. This has led to a number of murder, rape and additional AIDS infection cases. For example, on May 5, 2011, Reuters quoted Peter Ash, founder and director of Under the Same Sun (UTSS) as saying, "there is a belief that if you have relations with a girl with albinism, you will cure AIDS. So there are many girls with albinism who are being raped in this country (Tanzania) because of this belief, which is a false belief."

Neglect, ridicule and discrimination are other challenges faced by persons with albinism. A June 2018 New York Times article highlights some of these issues, where in Ghana, Bernice Agboada, a person with albinism, voices out her concern that “nobody wants to sit with me, even when the car is full”, anytime she boards a public transport. Also, Adam Abdul Wahab, in a JoyNews documentary recounts that his father refused to send him to school because he was an albino. This is because of a myth that albinos do not live long and that, Wahab will be dead at the time his father should be benefiting from his education.

The feel of neglect, ridicule and discrimination has left some persons with albinism attempt suicide. In In the Shadow of the Sun: Ukerewe Voices Pt. 2, Mussa, recalls a time he attempted to commit suicide by buying some clock batteries “to kill myself but it didn’t work, though I drank it”. Miyango, another albino, also expressed similar thoughts when she remarked that “I often think of buying drugs to kill myself”. They attribute these thoughts to being neglected and not valued by members of their community.

These problems faced by persons with albinism coupled with the need to celebrate their achievements led the UN to declare June 13 of every year as International Albinism Awareness Day (IAAD), in 2014. This will help in educating the public about the plights of these persons.

By: Cornelius Mensah-Onumah
Cornelius is a freelance researcher who holds an MSc in Defense & International Politics and BA in History and Geography