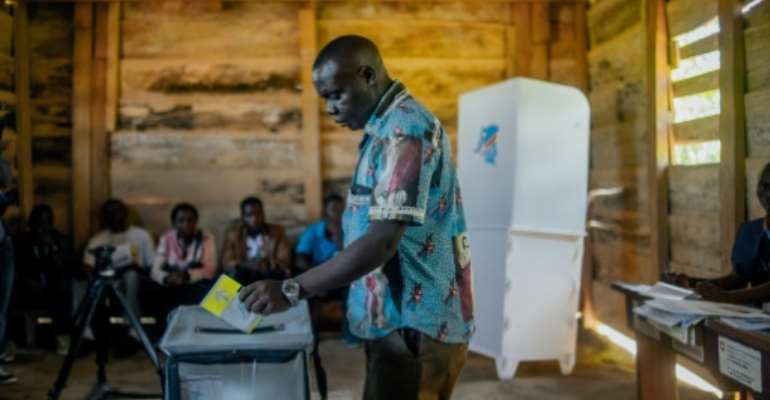 The election had been postponed in Beni because of conflict and an Ebola epidemic. By Luke DENNISON (AFP)

Voters in Beni and Butembo, towns in northeastern DR Congo ravaged by conflict and an Ebola epidemic, took part in long-delayed elections on Sunday.

Parliamentary and municipal polls also took place in the western Yumbi region some 300 kilometres (185 miles) north of the capital Kinshasa, three months after a massacre claimed at least 535 civilian lives.

All three are opposition strongholds in the vast central African country, with a combined electorate of around one million.

Voting was proceeding smoothly in the Mavivi and Ngadi districts of Beni that have seen frequent unrest involving armed militias, according to an AFP correspondent on the ground.

At stake are 15 seats in DR Congo's lower house of parliament, which counts 500 lawmakers.

But they are not eligible to vote in the presidential election, three months after veteran opposition leader Felix Tshisekedi won that election, the country's first peaceful transfer of power since independence from Belgium in 1960.

Nor will the vote will have any impact on the balance of power in parliament, where the party of former president Joseph Kabila won a commanding majority of seats.

Tshisekedi's party is working to put together a coalition government with Kabila's.

The formation of the new government is being closely watched for signs that Kabila will continue to hold sway in the nation's politics, if many top cabinet posts are filled by his supporters.

In Beni, voter Patrick Kasunga said "we're not altogether happy" in the three towns voting Sunday since they "all wanted to vote for president but the (electoral commission) stole this choice from us."

Sunday's polling follows an uptick in cases of Ebola in recent days after a lull of several weeks. The epidemic, which broke out in August, has so far killed more than 650 people.