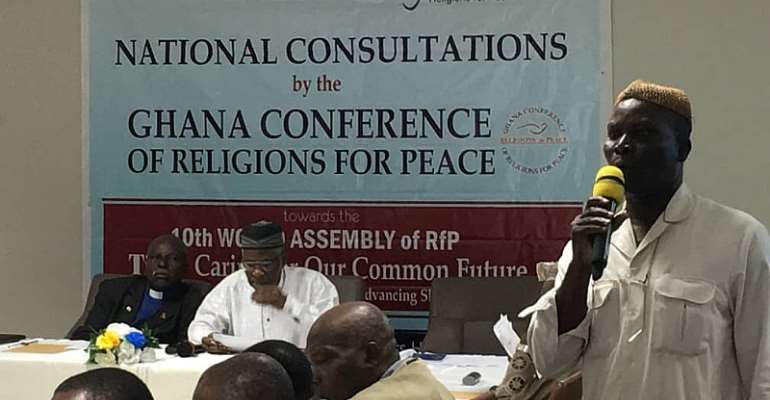 Participants at a just-ended national consultative conference have bemoaned nepotism, unemployment, mismanagement of nation’s resources, and ‘winner takes all’ syndrome of politicians, among others, as serious sources of conflicts and threat to national peace.

The national consultative conference was organized in Accra by the Ghana Conference of Religions for Peace (GCRP) under the general theme ‘Caring for Our Common Future – Advancing shared wellbeing’.

The conference was one of the four main processes of the preparatory work towards the 10th World Assembly of Religions for Peace International due to be held in August in Lindau, Germany with support from the Federal Government of Germany and the Friends of Lindau.

Participants discussed four other sub-themes, namely, ‘Preventing and Transforming Conflicts – including War and Terrorism’, Promoting Just and Harmonious Societies, Working for Sustainable and Integral Human Development, and Protecting the Earth.

Participants were drawn from women, youth and religious leaders from member-organisations of the Ghana Conference of Religions for Peace (GCRP), the Commission of Human Rights and Administrative Justice (CHRAJ), EANFOWORLD for Sustainable Development, an Accra-based CSO, among others.

Under the chairmanship of Alhaji Mama Gado Mohammed of the Office of the National Chief Imam, the Executive Secretary of GCRP, Hajj Muhammad Kpakpo Addo gave the background and current preparations worldwide towards the 10th World Assembly. Hajj Kpakpo Addo, who was the facilitator of the conference, analysed the Commission Papers meant for the World Assembly that includes caring for our common future by advancing positive peace; caring for our common future through preventing and transforming conflict including wars and terrorism, among others.

The participants were made to break into four groups to discuss the issues raised in the presentations, and returned to a plenary with recommendations on each of the sub-themes of the World Assembly.

These include the unbridled fight for political power, lack of food and shelter in some parts of the world, unemployment, nepotism, mismanagement of nation’s resources, terrorism and so on. The members came out with recommendations for restoration of peace in all parts of the world especially in the poor and less privileged parts of the world.

All the recommendations made would be presented to the ACRL-RfP as part of the amalgamated report of the Africa Region of RfP to the Assembly in Germany.