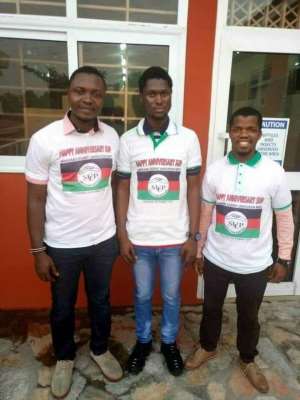 The keepers of our conscience, the lights of our democracy, the storages of truth and the painters of our hope. You're great men in Black's development and you have secured a greater spot in the museum of history.

Taking a mental flight down history and considering your achievements, I can he the speaker of the House Of Commons, Speaker John Bercow saying, "Hisory is

more than the path left by the past. It influences the present and can shape the future". It is equally true that history has no space for weaklings but has recorded and recognized only men and women who gallantly contributed to humanistic traditions.

With the political system that has emplaced us in a Mental and spiritual captivity, which allows our physical hands and feets to be worthless in fighting for and determined our own destiny as a people. You have painted our hopes and aspirations and have set a stage for a new Liberia where vision and equitable distribution of worth can be a reality.

When there is a growing dissatisfaction among our people and misappropriation of public funds, you always harmoniously organized a peaceful protest to restore our common interest.

When the democracy, in Liberia, is where classic elites accumulate wealth and power at the expense of the ignorance of the masses and where there is a giant- size economic catastrophe; you have been there to ensure accountability and good governance be profferred through powerful writing skill and oration.

When democracy pre-proposes and enlightens electorates who knows their self- interest than to choose what is in their best interest, you were one of those very few guys who interpreted the essence of democracy and its objectivity to the human family, especially in Liberia.

With all these, the society has given you blank check and create room for micro- nationalist and pseudo- state loyalist.

My pen can't never be directly proportional enough to thanking you for your immense contributions to the political discourse of our. We thank you and we would never thank you enough. We might disagree in good fate sometimes but yet we're amidst of your analysis.

I would conclusively conclude with the famous lines in Jesse Jackson 1988 Convention speech: "Hold your head high, stick your chest out. You can make it. It gets dark sometimes, but the morning comes. Don’t you surrender. Suffering breeds character. Character breeds faith. In the end faith will not disappoint. You must not surrender. You may or may not get there, but just know that you’re qualified and you hold on and hold out".

With you in the social justice campaign, Little Liberia will win and her foremost objective will be achieved. Onward to victory!

Sallia S. Komala is a freshman student studying civil engineering at The Jiangxi University of Science and Technology. He’s Amigos, Liberian, Afro-optimist, Emerging Pan-Africanist leader, Engaging peacemaker, and Practicing writer. He can be reached at : [email protected] or +86 130-2722-7076.